Posted on September 9, 2013 by paridevita

Hello everyone; once again it is I, Chess the purebred border collie, the Semi-Fearless One, filling in for the guy I live with who is preoccupied with other things. You may remember me from such posts as “Dumb Garden Pictures” and “A Partly Sad Story”, among so many others.

It’s a gloomy evening here on the western edge of Denver, with thunder and rain, and of course that’s pretty scary, so after I’m done here –it won’t be long–I’ll have to be cuddled and maybe find a place to hide. It seems like all it does here is thunder. At least I was able to go on my walk.

Okay, now, let’s talk about dumb garden pictures. Right before I had to go inside because of the thunder–and now the rain–the guy I live with thought it might be a “good idea” to take some pictures of the garden. Here I am, right before I had to go in. In fact, actually starting for the back door. It might have been a good idea to use the tripod, too, but apparently he can only have one good idea at a time.

He says when it gets really dark all you can see of me is the white. Very funny. The funny thing is that it’s raining, and he left the sprinkler on yesterday for so long he was afraid the Water Police would show up at our front door. I would have scared them away, of course. Unless it was thundering.

Anyway, as the guy I live with would remind me, he pioneered the type of garden photography I’m about to post, even though, if you ask me, this whole thing is extremely dumb. Give him a camera and he thinks he’s an artist. 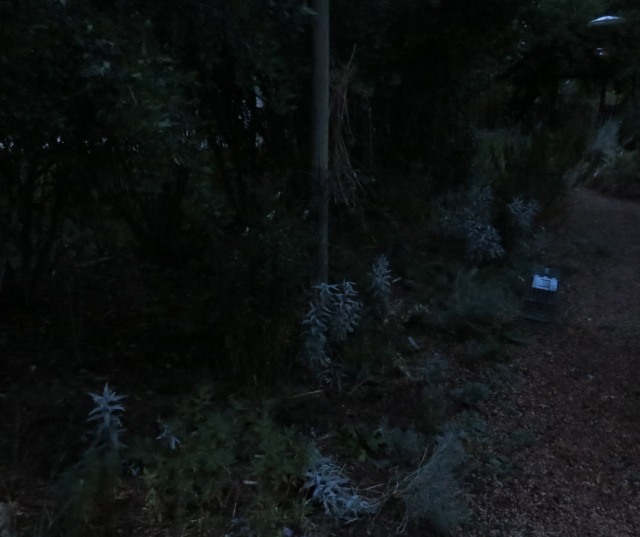 Granted, the garden does look best when viewed at this time of the evening.

The shade garden. He forgot that the sprinkler was there. He planted some little oaks yesterday and wanted to give them a good drink. 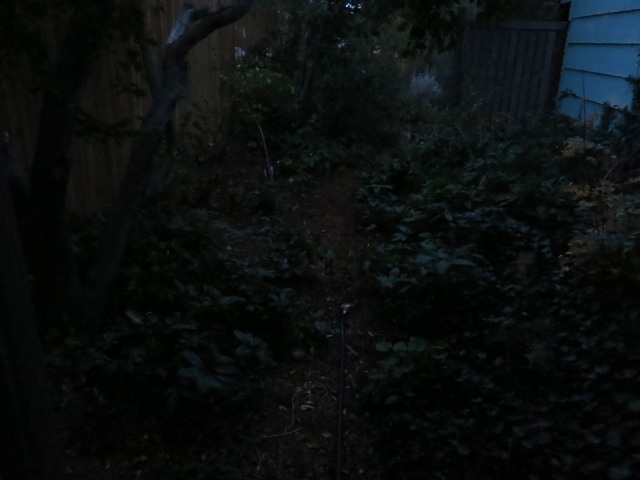 A bunch of yuccas. 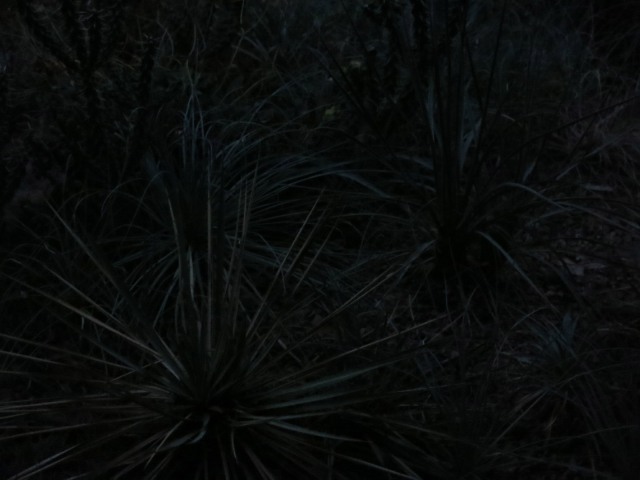 A bunch of chollas.

Looking across the rock garden. The prayer flags are still there, and he does remember to water the plants from time to time.

Part of the “lawn”, with Sporobolus airoides, one of his favorite grasses.

The rock garden on the south side, and the shed.

Well, thank goodness, that’s it. He promises he won’t do this again. But he does claim that the fuzziness lends an “air of mystery”.

I have to go now. I’ll see you next time, when the sun is shining on the garden.

9 Responses to a gloomy evening