I don’t get it

Posted on September 7, 2013 by paridevita

Greetings and salutations, everyone; yes, once again it is I, Chess the purebred border collie, filling in for the guy I live with, who is busy planting. You may remember me from such delightful posts as “Something Completely Different” and “A Man, A Plan, A Gazoon”, among others.

Here I am in an atypical pose, showing off my handsome profile.

Today we had to get up really early so that the guy I live with could leave me at home alone and go to a plant sale. He blamed me for not getting up early enough yesterday, and so he had to set the alarm clock last night. He claims that if the fan is blowing in air that’s cool enough, I’ll lie in bed until I feel like getting up, which sometimes isn’t very early at all. Of course it’s his fault that when he bought new sheets (because the old ones were so old they ripped) he got really soft sheets from Pottery Barn even though they weren’t the most expensive, and so I like to lie on them with the fans blowing cool air up my nose for as long as possible. This is déjà vu all over again, like Yoga Berra said. Well, at least if you have the same discussion over and over again, you don’t have to think up anything new to say.

Anyway, he set the alarm, and we got up early, and I got to chase a smelly cat out of the garden first thing. I may be 11 but I can still chase cats.

We went on our walk, and then a little later, he left. I was sad. This was the chapter plant sale of the Rocky Mountain Chapter of the North American Rock Garden Society, which he says is always a good sale, and he came back with plants. I stopped being sad. 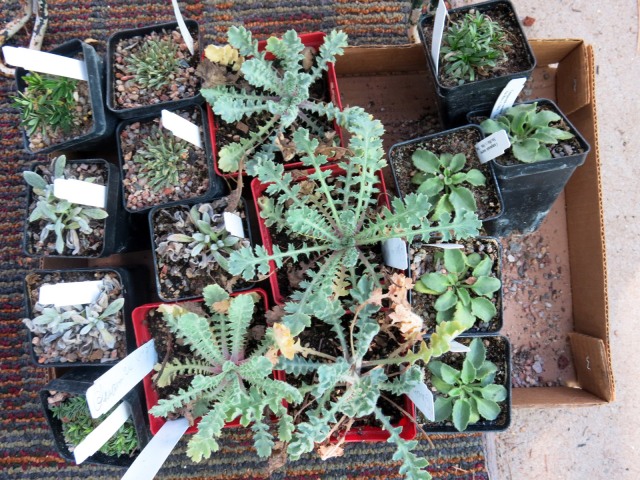 You can see that the flats are already partly empty, because he was busy planting. He used his Swedish rock garden trowel to plant. He says that different plants require different trowels, which I don’t believe. He says a lot of stuff. 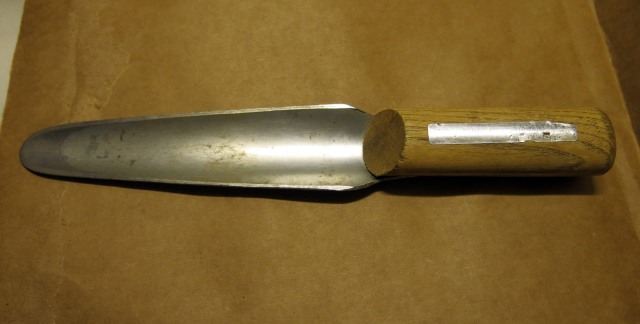 But why, I wondered, did he think that he needed more plants to begin with? It isn’t like the garden is empty or anything. There are plants everywhere. I didn’t get it, and he tried to explain it away by saying something about how some of the plants might not make it through the winter. But what if they all did make it? When he says that something probably won’t live, and won’t get very big, then next year, it’s a tree.

I know that autumn is coming (the guy I live with says so, and promises it will eventually be less hot than it is now), and that that’s the beginning of the dry season here (I don’t understand how a place where it almost never rains can have a “dry season”), and he has to water all the new plants, and might forget one, or twenty, but I still don’t get it.

Then he tried to compare it to biscuits. One biscuit is good, but twenty are better. I get the math, but I eat biscuits. They’re good, and I like them a lot. Plants are just plants. So I still don’t get it.

He says we’re going to watch the movie Key Largo; the scene where Frank McCloud (Bogart) tells Johnny Rocco that what he wants in life is more. Rocco wants more. The guy I live with wants more. More plants. This is just plain weird.

Well, that’s about it. I don’t know why I had to be left alone, and don’t know why there have to be more plants in an already stuffed garden. Maybe I will when we watch the movie, which I don’t really want to do.

I’ll say goodbye now, and leave you with some pictures of a different owl who was sitting on the pole just this evening. I was going to write “an owl that” or “an owl which”, but of course the right choice is “an owl who”. The stuff I think of, huh. Look at those talons.

idle
View all posts by paridevita →
This entry was posted in Uncategorized and tagged great horned owl, RMCNARGS. Bookmark the permalink.

11 Responses to I don’t get it