Greetings and salutations everyone; once again it is I, Chess the totally purebred border collie, here to entertain and inform you, since the guy I live with is incapable of doing either, it seems.  You may remember me from such enjoyable posts as “Where We Live” and “As Above, So Below” among many others.

There was something the guy I live with did not know. I almost laughed, except border collies, as a rule, do not laugh. We might snicker, but we rarely laugh. Something he did not know. Can you believe it?

Well, first of all, the day wasn’t entirely gray, there was some sun this morning, but we did quite a bit of napping (one reason I’m so fond of the guy I live with; he knows when a nap is in order), and then, a box of bulbs came in the mail, and he spent several hours making labels and planting bulbs with his Swedish rock gardening trowel. In fact, the bulletin of the Alpine Garden Society showed a picture of Reginald Farrer with a trowel exactly like the guy I live with’s Swedish one, so he figured he was in good hands, planting away.

So he planted and planted, and then planted some more, and when he was all done, he decided, for no reason I could think of, to take pictures of the squirrel nests in the yard. This one is way up in the honey locust.

This one is in the maple he says he’s going to cut down, “eventually”.

And then one in the apple tree, in the way back.

Squirrel nests (this is the part he didn’t know) are called drays, or dreys (the Oxford English Dictionary prefers the first spelling), and he thinks they’re called that because of the sticks dragged up into the tree, since one etymology of the word is from some old Teutonic word meaning dragging sticks behind you. Whatever. He learned something. The yard is full of drays.

“So that”, he said out loud, “is where Earl, Merle, and Pearl come from.” I knew they spent a lot of time in the trees, and figured that was obvious, but the guy I live with can be slow on the uptake sometimes. Admittedly, he was distracted planting bulbs today.

Then later it started to pour rain, and we thought the whole rain thing had started all over again, but it stopped. He took a picture of Colchicum cilicium. In fact, this is at least the second time he’s done this. He posted pictures of colchicums, or naked ladies last year, and believe it or not got the name of the white colchicum partly right that time. I just write down what he says, so that’s why it’s not always right. Like I have time to check everything he says. 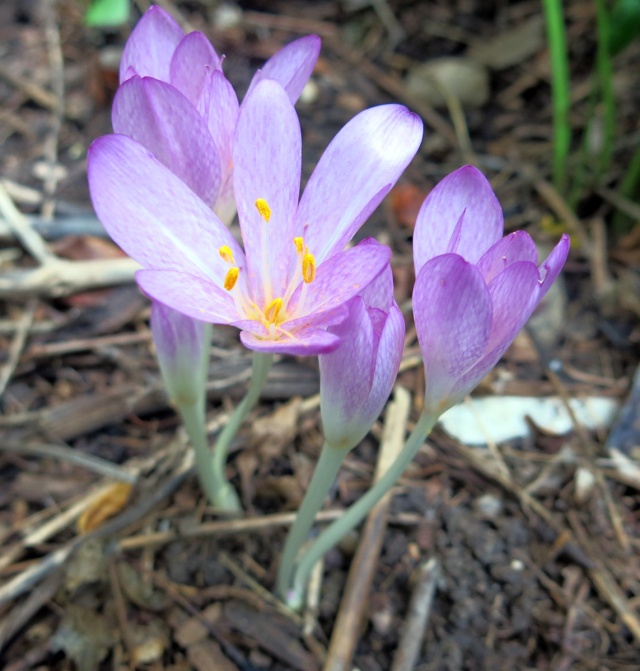 Anyway there it is.

I think I better go now, before the guy I live with learns something else, and makes me tell you that, too.

idle
View all posts by paridevita →
This entry was posted in Uncategorized and tagged Colchicum cilicium. Bookmark the permalink.

19 Responses to gray day, with drays