Here I am in a characteristic pose. (I got that right.) I don’t stand still for very long, except when I’m asleep. Even then, I sometimes run, a little. 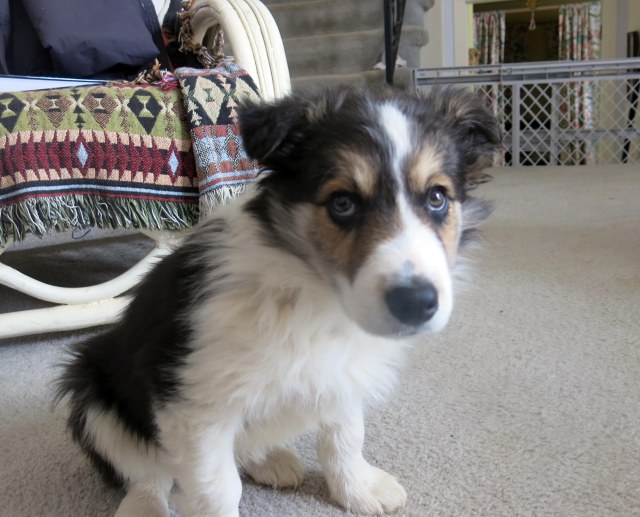 We have “cabin fever”. That’s what’s called an expression. We don’t have a cabin, and I know this because I learned to climb the stairs this morning, and have been everywhere in the house except for downstairs. I also noticed that there are dogs that look just like me in the glass things hanging on the walls, but the guy I live with says they won’t chomp me.

I learned to climb down the stairs just a while ago, and come when I’m called (well, sometimes), and am practicing staying in my fort in the kitchen. I have an important role to play in the household, here, and I’m working at it. Mostly.

Neither of us has a fever, either, though there is some feverish activity going on here, to help with the cabin fever, or so I’m told, and I did create quite a bit of excitement by being taken on a “good will tour” today where I got to meet some of the neighbors. They liked me.

I had my lunch just a little while ago. It took some time for me to get over the urping. I did suggest, rather loudly, to the guy I live with, that we get up at one o’clock this morning so I could do some eating, and, surprisingly, he got up, and we went downstairs. We went back to bed after that.

Oh, and also, I learned how to get into the real bed. I know that the guy I live with’s former buddy slept there, and died there several days ago, but as I said, my role here is super important, and I can hardly wait to get big enough so that it becomes my bed, and I can sleep in it just like his last buddy did, because that’s what we purebred border collies do, and I’m looking forward to a good, cozy life here.

I thought, since there were pictures taken today, that I would show some of the feverish activity going on here, which I have nothing to do with, naturally. 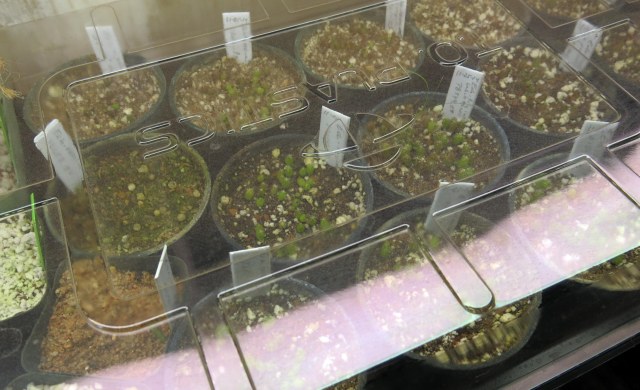 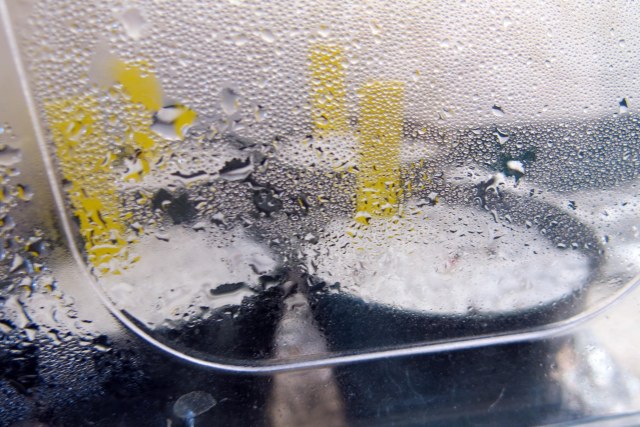 The “downstairs iris”. Don’t ask me. I just got here a couple of days ago. I know there are some strange things going on here, that have something to do with gardening, but how strange, I guess you’ll never know, because I just don’t understand them at all. As I said before, I’m little. 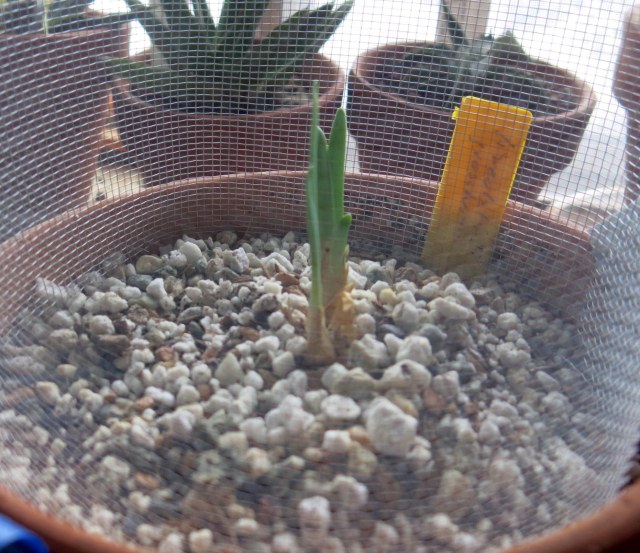 The iris in the laundry room. The laundry room is downstairs, I’m pretty sure, and I don’t know why these are different from the “downstairs iris”. They just are, I guess. 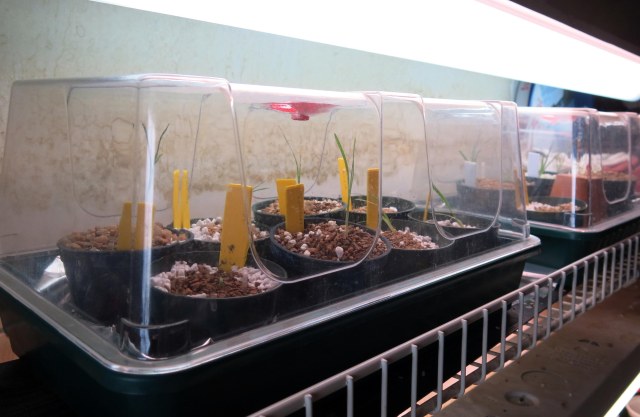 There are “upstairs iris” too, but how many pictures of iris can a person stand, anyway?

So that’s the gardening part of the blog. I get that it’s a requirement. The part about me is much better.

I discovered that there are some rules here. “No eating the pine cones” is the only one so far. This is this collection of pine cones that’s supposed to be really important or something. They were in the basket before I showed up. I tried to pretend that someone else had moved them, but the guy I live with didn’t believe me. 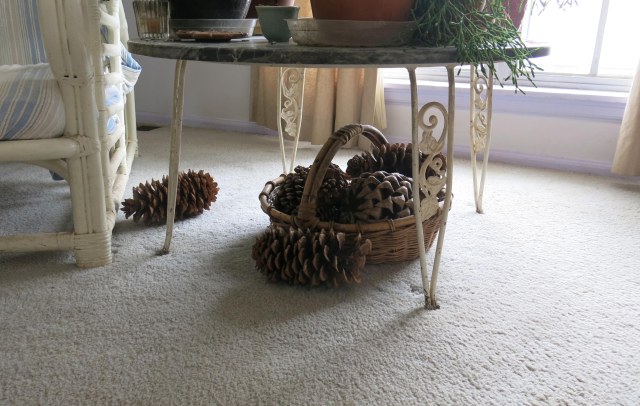 Well, if I can’t chew on pine cones, things are pretty boring here right now. That’s why we have cabin fever.

I looked for something to read 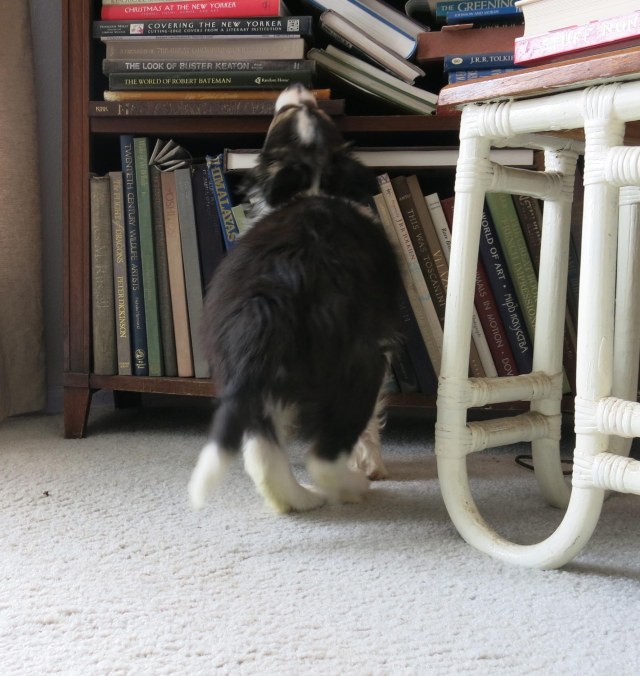 but decided on a nap instead. 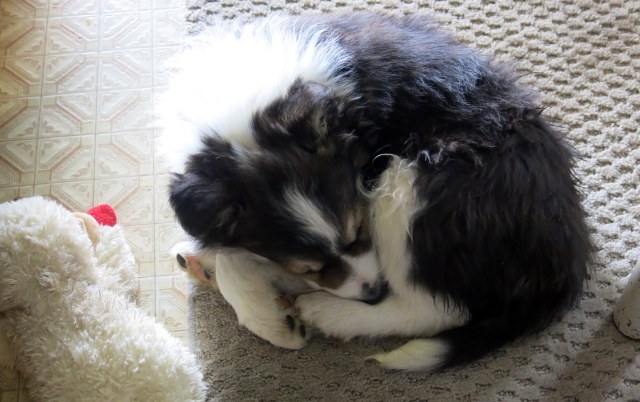 I did get to play in the snow in the back yard for quite a while, and that was fun. In fact, I have a short movie to show you, featuring me.

Pretty cute, huh? I liked it.

It’s exhausting being me, so I’ll let you go now. 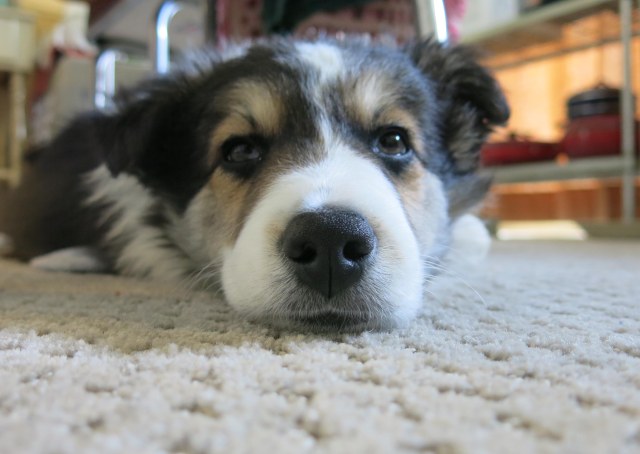