Hello everyone; yes, once again it is I, Mani the tiny purebred border collie, here to tell you all about my day, and share some news about the garden. You may remember me from such posts as “The First Morning”, and maybe a couple of others.

There wasn’t any snow today, which was pretty different. The sun came out, and that was even more different.

The guy I live with was really mad, because rabbits had eaten some of his plants, but he sprayed some anti-rabbit stuff and put up another cage so maybe that will take care of it. We don’t know how the rabbits get into the yard.

There were plants coming up. This is Corydalis glaucescens ‘Early Beauty’. The guy I live with says that these corydalis don’t care about the weather.

It was pretty funny to run away from the guy I live with when he wanted me to come inside; he can’t catch me. It’s also fun to pull plant labels out of the ground. I know I’m here to make his life cheerier, so I probably won’t get into a huge amount of trouble.

I got a chew stick today. 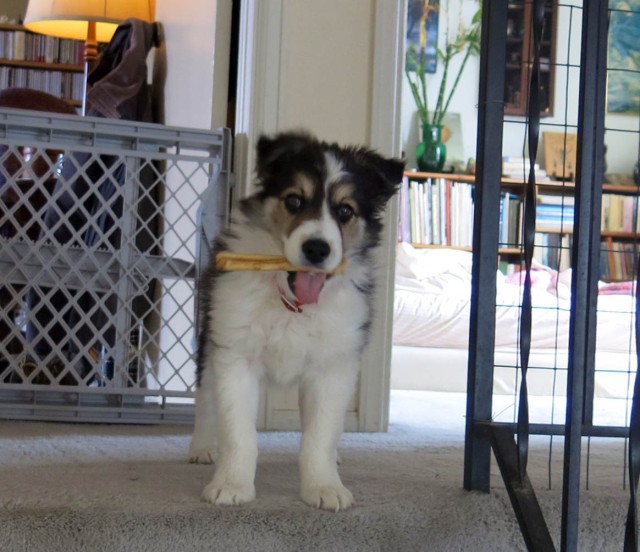 And I played on the bed, some. The guy I live with’s friend, who is no longer here, decorated this bedroom. This is where we sleep. Those are her books there. He says it makes him very sad to think that she can’t cuddle me, because she would have loved to. Well, who wouldn’t? I look pretty cuddly. 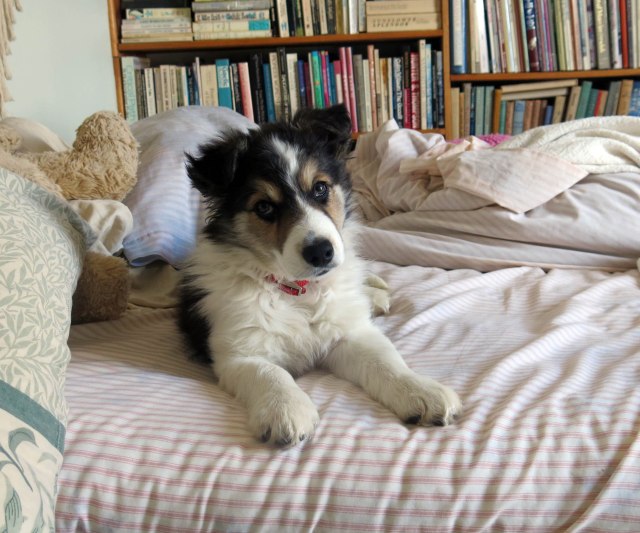 I was going to go to sleep on the stairs, but the guy I live with said that was “ill-considered”. I didn’t think so, but he overruled me.

Downstairs, I got all fierce. I do look pretty terrifying, don’t I? I mean, you would run if you saw me coming, right? Even fiercer than the cast skull on the little table. I think that’s a lion. That was hers too, so the guy I live with isn’t completely sure. But it’s not as fierce as this purebred border collie coming right at you, now, is it?

There’s a downstairs below this, but I haven’t been down there yet. There’s a bed down there, and some other stuff. And there are irises. Here’s one. They’re being raised there until they can go outside, in a month or two.

That’s about all that’s been going on. The guy I live with checks seedlings, plays with me, goes outside with me, feeds me, runs the vacuum cleaner (which is scary), and we take naps. That’s about it. I’ll leave you with another cute picture of me. I mean, why not, huh.

idle
View all posts by paridevita →
This entry was posted in Uncategorized and tagged border collies, Corydalis glaucescens. Bookmark the permalink.

18 Responses to no snow today