the cone of silence

Greetings and salutations everyone; yes, once again it is I, Mani the tiny, long-suffering purebred border collie, filling in for the guy I live with, and just posting to keep up to date, which we like to do. You may remember me from such equally up-to-date posts as “The Star Student”, and “Mostly About Me”, among quite a few others.

Here I am in an utterly pathetic pose. 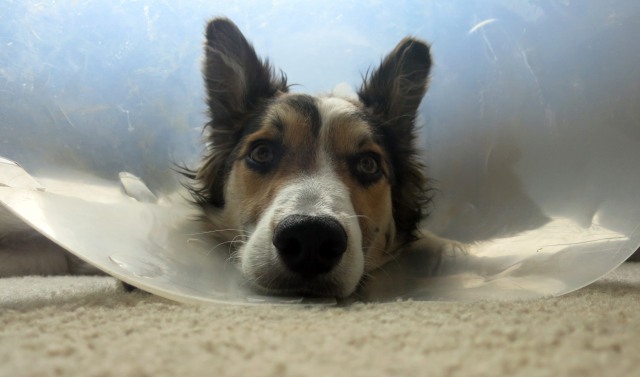 Things were going okay, as in dreadfully tediously okay, with me, although I was unbearably hot, until I had a slight complication yesterday, and I wound up in the emergency room, because the guy I live with is that kind of guy, hauling me off to the doctor pretty much whenever, and there I learned something called “waiting”. The floor of the room I waited in was extremely cool. And then this morning I also saw my doctor, and now things are “back on track”, and I’m on drugs and I don’t have to do anything. How much better could life be than that?

Oh, and today, while I was at the doctor’s, I saw a couple things that looked kind of like really big dogs, but the guy I live with said they were called “horses”. The stuff you learn. I barked at them just to show who was fiercest.

So that’s why I’ve been so quiet lately, I mean posting-wise. The guy I live with isn’t doing any gardening, because I would get sad, being stuck inside and all, though he does occasionally rush out and take a picture or two.

The guy I live with posted this picture of a black-chinned hummingbird on Facebook, so if you’re on that, and you saw it, you can look away. He took it through the living room window, which he claims is covered with “nose prints”. I have no idea what that means. 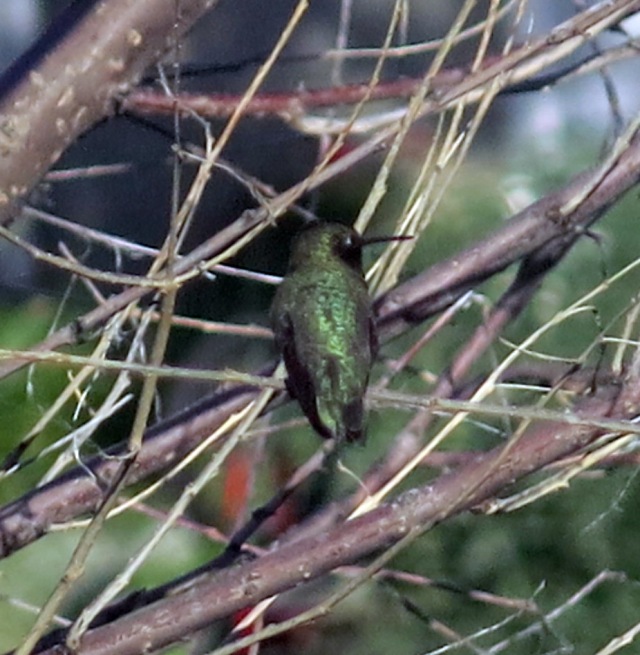 And then, to make this a truly fascinating post, here’s a picture of a cloud. He says it was about 44 kilometers away, to the east. I’m learning the metric system so I can be very advanced, if you didn’t know.

So the guy I live with said the weather was all out east, which is usually is, and then all of a sudden it started raining here, and then hailing.

It wasn’t very big hail. The guy I live with says that since we’re gardeners, we don’t like hail, so that’s something to store away for later, I guess.

Well, that’s it. Until next time, then.

10 Responses to the cone of silence