Greetings and salutations, everyone; yes, once again it is I, Mani the tiny purebred border collie, though really I’m not all that tiny and am kind of huge, filling in for the guy I live with, and here to bring you the latest and greatest news from our garden. You may remember me from such posts as “The Star Student”, among so many, many others.

Ears slightly back, as you may notice. Rather noble, don’t you think?

Maybe you’d like to see another picture of me, looking kind of wistful or something. 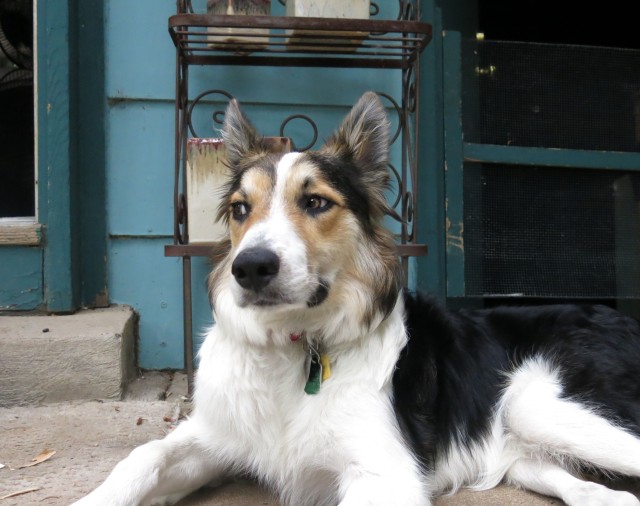 Once again, not much has been going on, but in the middle of all this nothing going on, the guy I live with decided to fix the fence on the south side of the house. This meant moving six or seven troughs, each of which, he claimed, weighed three hundred pounds, and he moved them all without running over my feet. Amazing, huh.

The troughs had been there for years, all in a row, on cinder blocks, but the guy I live with said they were too hard to keep watered, and the fence was leaning over them so much that it looked completely ridiculous.

He put up a four-by-four but couldn’t get it completely upright, so it leans a little, too. He said that was okay. All the pickets were falling to pieces and so they got replaced. The guy I live with said that the fence work done in this neighborhood, when it was built way back when, was not exactly quality work.

There’s going to be a garden there, now. This area is unbearably hot in the summer. 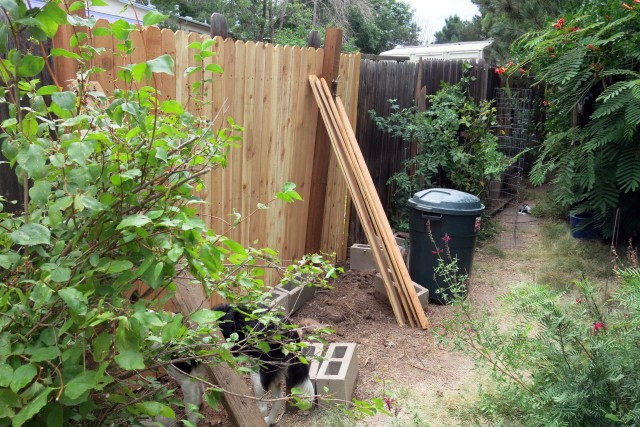 Today he put in another four-by-four and this one is completely upright. I know, because I made sure it was.

The guy I live with says that autumn is drawing, well, he said “nigh”, but I think he means closer. I don’t know what “autumn” is. I guess I’ll find out. I hope it’s nothing scary.

And of course I’ve been going on my walks. That’s me on the end of the long leash, if you didn’t know. I like to make a game of trying to get the walking harness on, which the guy I live with finds moderately annoying, so of course it’s fun. 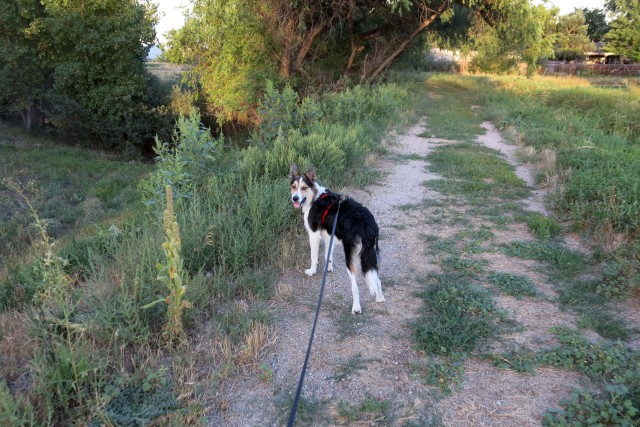 On one part of our walk is the native marigold, Dyssodia papposa. It’s not much to look at, but the guy I live with says it smells just like a marigold. He likes the smell of marigolds.

The guy I live with says that he used to walk down the creek path with the border collie who lived here before me, whose name was Chess (maybe you knew him), but that last summer they didn’t walk there very much, and so the trail is overgrown, but that when the grass dries down we’ll blaze a new trail, so I can walk all the way down and back. It sounds pretty good to me. I’ve been part way down, but it was hard to walk, because of all the grass.

There was water in the creek for a while this spring, and I got to splash in it. The creek is on the left, and winds behind that first tree there, and then goes south. It comes from the mountains. 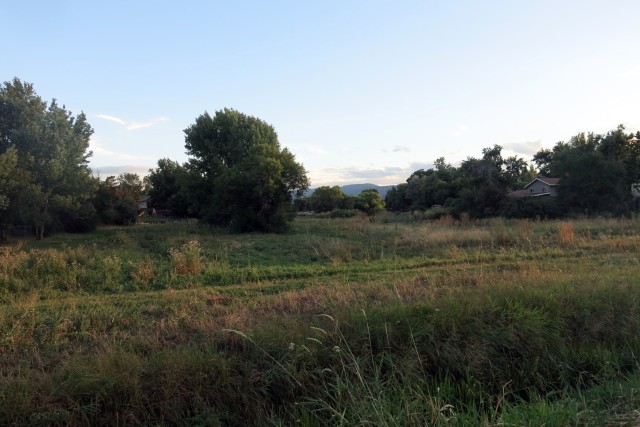 I guess that’s it for today. You can see that the guy I live with has been really busy, which is good, because otherwise he says his mind will start to crumble, and I wouldn’t want that. I’ve been equally busy, but doing other stuff. You know, the kind of stuff you would do if you were an eight-month-old purebred border collie.

idle
View all posts by paridevita →
This entry was posted in Uncategorized and tagged Dyssodia papposa. Bookmark the permalink.

12 Responses to the project