Greetings and salutations, everyone; yes, once again it is I, Mani the purebred border collie, filling in for the guy I live with, and here to bring you the latest news from our rather weedy garden. You may remember me from such posts as “The Star Student”, among so many, many others.

Here I am in a characteristic pose. There was a bit too much light falling on me when this picture was taken.

I really liked the picture the guy I live with took of me and posted on Facebook. I guess not many people noticed it was really a picture of me. 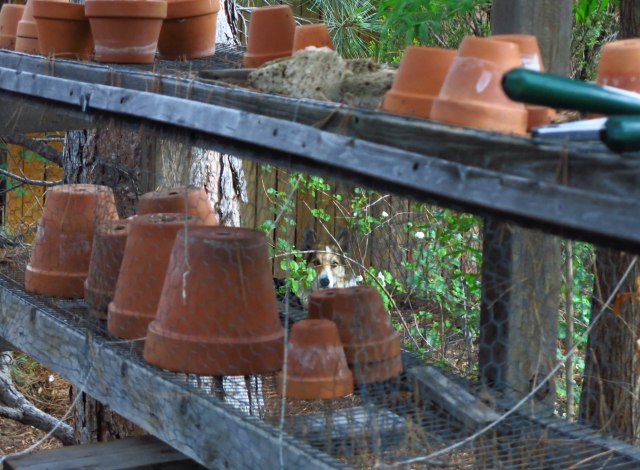 But anyway, I guess I should explain the title of today’s post, and I think I’ll mention the bad thing first. The guy I live with said this wasn’t totally terrible, but also not hugely great.

Look at all the dead branches on the honey locust.

Some of these big branches died last year or the year before, and didn’t get removed because one of the extension poles on the pole saw got broken when he sawed down a big branch from a neighbor’s tree and the branch fell the wrong way and broke the pole. Sawing off the branches isn’t much of an issue, but disposing of the branches is.

There’s a lot of new growth on the tree, too. The guy I live with looked up diseases of honey locusts and the tree doesn’t seem to have any of them.

So that’s the bad news.

We have a whole bunch of baby spiders behind the sliding glass door. There are two doors; the outer one was added later. That’s one reason why you see the wooden ramp in so many pictures; the addition of the outer door made the threshold or whatever so short that a ramp seemed like a good idea (it was also for aging purebred border collies to get in and out of the kitchen). I’m not really thrilled with the idea of hundreds of spiders trying to crawl on me but the guy I live with said he would make sure they went outside. 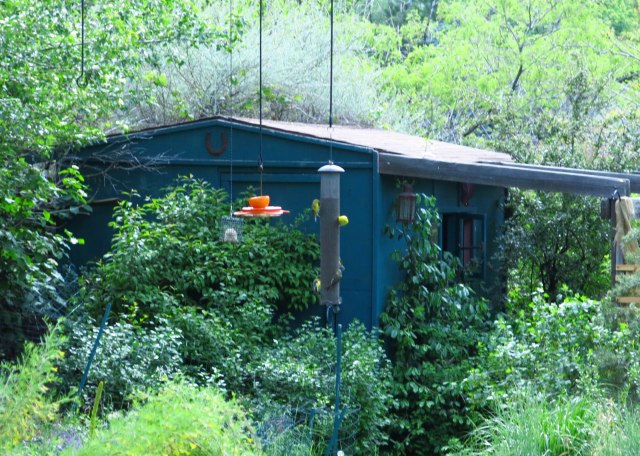 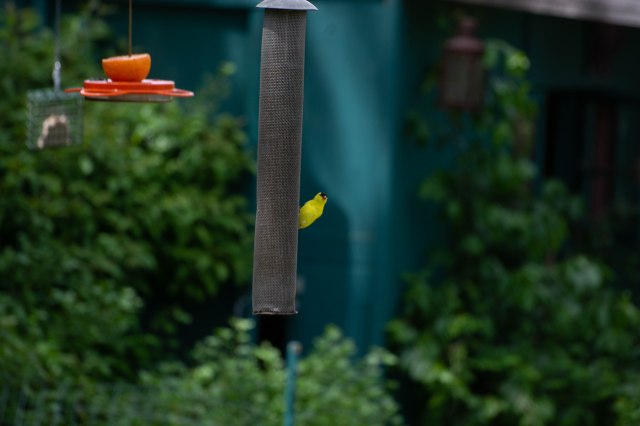 The guy I live with said he thinks we have two species of goldfinch visiting the feeder; the American (Carduelis tristis), and the Lesser (C. psaltria). Apparently (he took Latin but doesn’t remember this word) “carduelis” is the Latin name for “goldfinch”. Carduus is the Latin name for “thistle” so I guess you can see the connection. Thistles were used to card wool back in the old days and so “carding” also comes from the Latin word for thistle. The guy I live with said when he worked outside for the phone company they had a device which was called a “carding file”or “file card” which was used to roughen the surface of telephone cable during a repair, but is also used to remove metal from files.

The stuff you learn on this blog. I mean, really.

Now I need to talk about the garden a little bit. But first I have to go back to last Friday. The guy I live with had a dentist’s appointment in the afternoon. When he turned on the computer that morning and looked at the weather forecast he saw an eighty percent chance of severe weather with golf-ball-sized hail. I think he actually cried a little bit. He was terrified that he would be at the dentist’s and I would be here, during a bad storm. I guess this is called separation anxiety and even though he could pretty much walk to the dentist’s and I have a very secure fort which I like a lot, past experiences come to mind in situations like this.

Well, the day wore on, and the forecast was changed to heavy rain. And nothing happened. He came back from the dentist’s and still nothing had happened. I was fine.

Then it rained. It rained most of Saturday morning, in fact, and without thunder, too. I got to go on a few very damp walks.

So the garden now is super green.

Even the “way back” is green now. It looked kind of forlorn last month. Those are geraniums in flower. 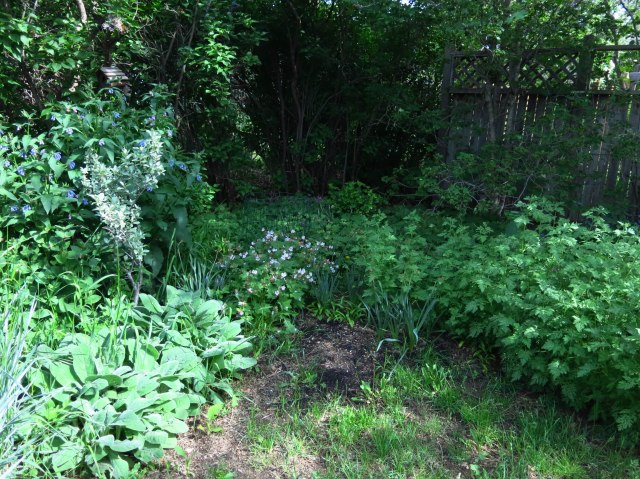 And of course there are some different things in flower. This is Eremurus spectabilis. When I say “different” it’s because lots of people grow eremurus, but not this one. (This sort of thing is typical, here.) 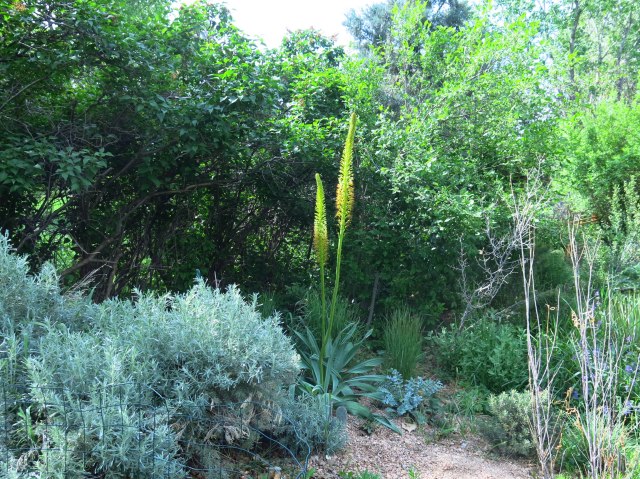 Like in this picture. This is Caragana microphylla ‘Tidy’, and the onions are Allium jesdianum ‘Per Wendelbo’. Not the ordinary alliums you see everywhere. 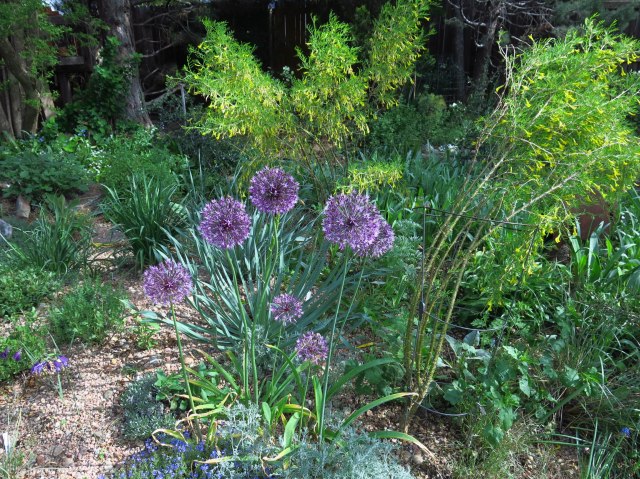 I guess the idea of growing “different” plants is okay, but it does mean that it takes some effort finding the plants.

There are paintbrushes flowering in the trough. These are Castilleja integra. (The guy I live with said to say this is the easiest paintbrush to grow.) 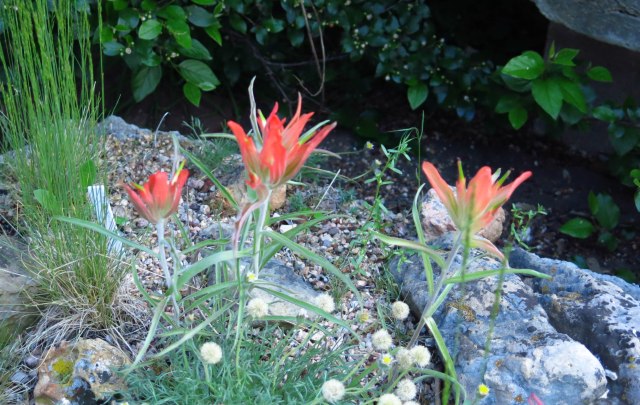 He’s been having some trouble getting good pictures of the Drooping Star of Bethlehem, Ornithogalum nutans, and so he said this will have to do.

The sea kale (Crambe maritima) is doing pretty well. This is the first year it’s flowered like this, but that’s because the first plants were moved all over the garden and so never did anything. Then new ones were planted a few years ago, moved again, and then moved once more, then supposedly permanently removed, but the roots survived and now we have flowering sea kale. 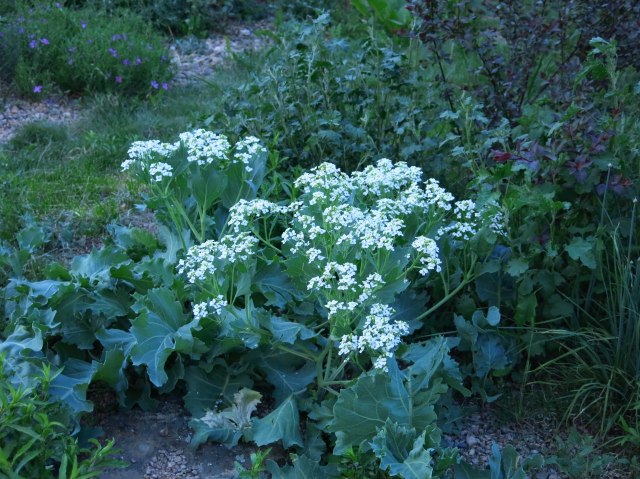 The guy I live with said that the leaves were “edible”. He says that with kale you always use quotes around the word “edible”. We’re not going to be having it for dinner.

There used to be other crambes here. Crambe cordifolia, which is huge, eventually died, for unknown reasons. Crambe orientalis died because it got moved around the garden too many times.

So that’s the news for today. I’ll take my leave with a picture of me on my walk, following the coyote path through a sea of smooth brome and dandelions. 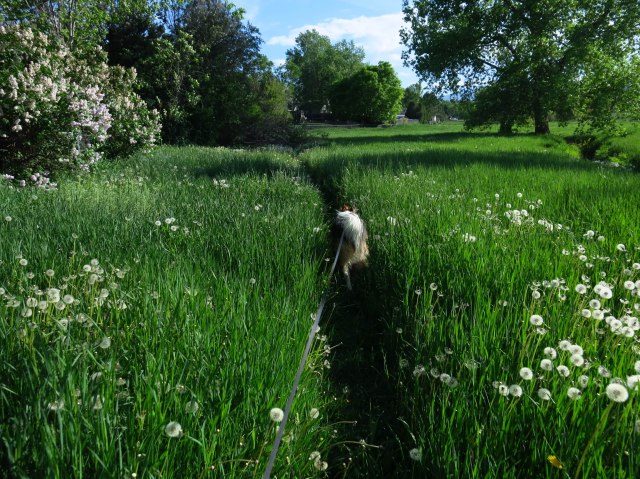 18 Responses to good things and bad