Greetings and salutations, everyone; yes, once again it is I, Mani the purebred border collie, filling in for the guy I live with, and here to bring you up to date on the latest news from our garden. You may remember me from such posts as “The Missing Grass”, among so many, many others. 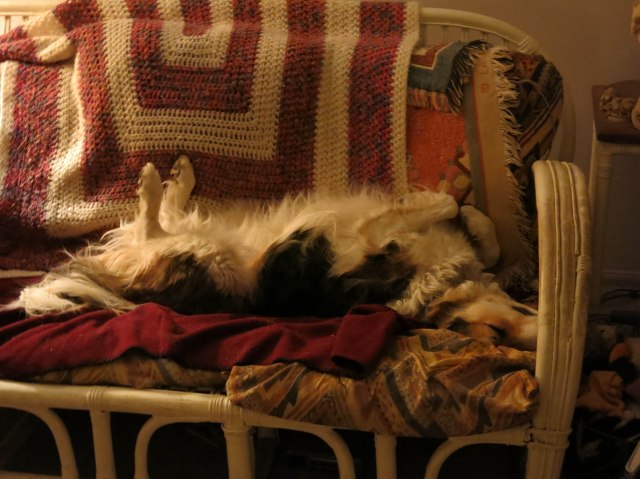 The guy I live with took this picture of me after I came home from Day Care. He said it would have been better if you couldn’t see the awful 1970s cushion covers on the couch, but I did have to do some rearranging before I could sleep there.

This is more like a real characteristic pose, of course. 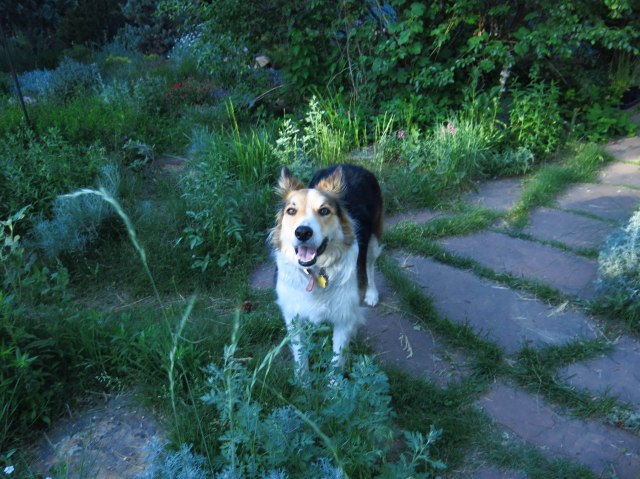 Well, I’m not exactly sure what to say about the things that have happened here, except that they’ve been things, and have happened. There was yet another severe storm warning, and it hailed here, though not horribly (the guy I live with said the hailstones were “chickpea-sized”, whatever that means), and now it seems like it’s drying out (the humidity was seven percent the other day), which makes the guy I live with reasonably content.

Some people don’t like dryness, but he certainly does (because of the lack of severe weather), and dry summers remind him of his happy childhood in Los Angeles, so I guess I won’t say anything. I definitely don’t like thunderstorms.

We did see the muskrat the other day, happily paddling up the canal with a mouthful of greenery, but couldn’t get a picture in time.

And just today I had what the guy I live with calls an L.R.E., which means large reptile encounter. I found a western yellow-bellied racer in the garden. He said it was not small. If you want to look, it’s here: https://www.coloradoherping.com/yellow-bellied-racer—western-coluber-constrictor-flaviventris-colorado-snakes.html

I really wanted to get it, but the guy I live with said not to. I still wanted to, but he said racers can be really unpleasant and I might get bitten (though racers aren’t venomous), but I still wanted to, and he said like super not to, and eventually I realized that not only was he concerned about the snake, he was concerned about me, and so I came inside. He said to take a look at a post Chess made, to see about how big this one was https://paridevita.com/2014/08/01/slithering-in-the-bindweed/
but also to note that that post made mention of a much larger one, so just to stay inside while the racer slithered around.

You may be thinking that all of this is pretty scary, but compared to what happened the other night it wasn’t much of anything.

A stink bug flew into the kitchen. 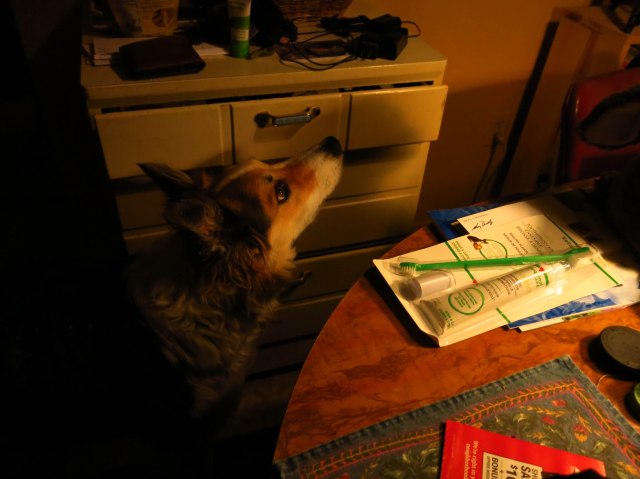 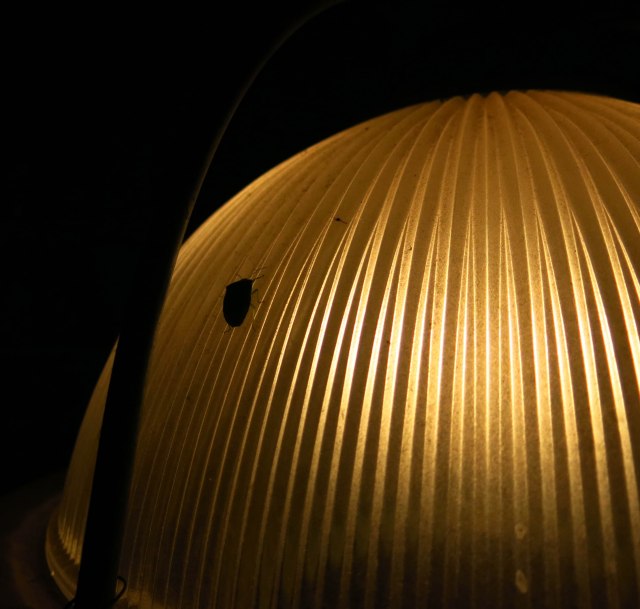 It was almost too much for me.

The guy I live with said to wait until he got out the toothpaste he bought for me (which you can see in the picture of me looking at the stink bug), and then to compare.

I guess it’s about time to talk about the garden now. The guy I live with said the neighbors used some weed-and-feed-type thing and the smell was really strong in the garden and now he’s worried that everything will die. If it does, at least we’ll have some pictures.

Here’s the bitterroot, Lewisia rediviva, which must have come from a seed pot which was tossed out. 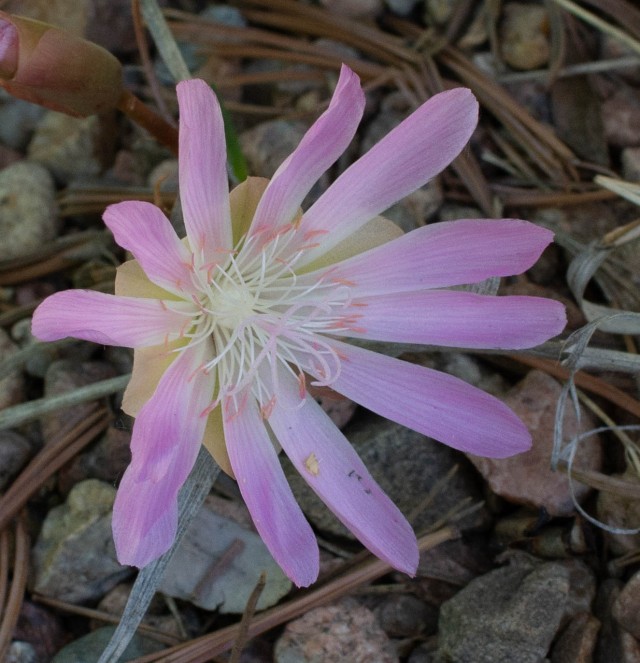 And this calochortus, which he can’t identify. (I know, right? Mister Know-it-all doesn’t know.) 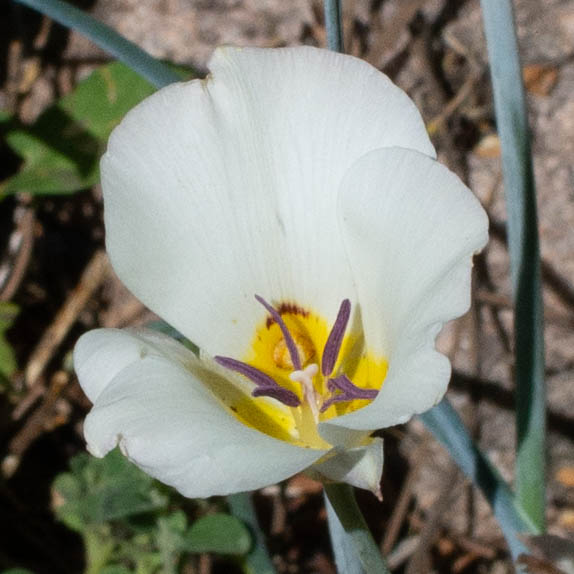 Remember the corner of the garden which was cleared out, a while back? Thanks to that, the Persian Yellow rose has had it best year in quite some time. 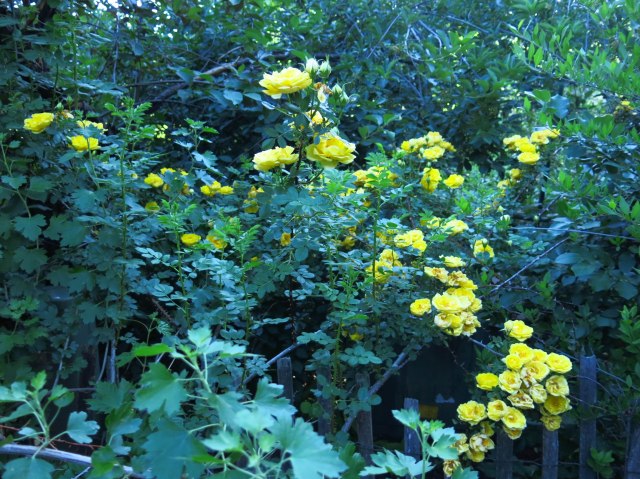 On the other side of the arbor from the rose, the honeysuckle Lonicera sempervirens ‘Flava’ is having a good year, too (but it usually does). 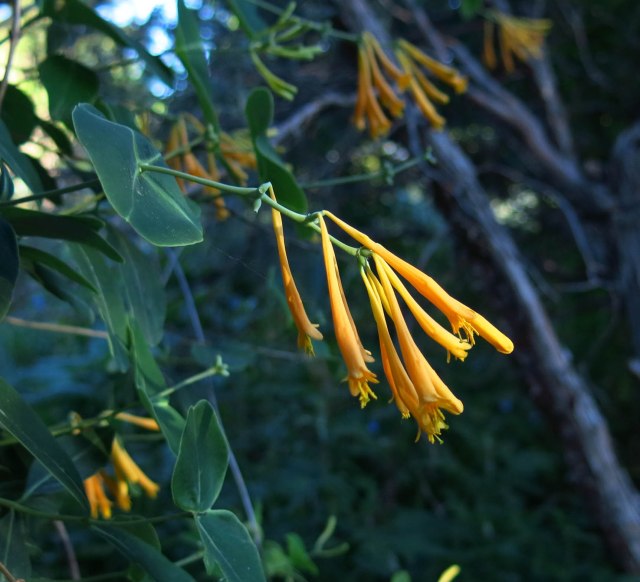 This is growing up and over the arbor, though not in the sort of luxurious fashion that “up and over” implies. The guy I live with said he got this from We-Du Nursery in North Carolina many years ago. It’s the only honeysuckle which has survived here for any length of time.

My walks, to get back to stuff about me, finally, have been okay, though the guy I live with said it wouldn’t hurt if the county came and mowed in the open space and along the canal. 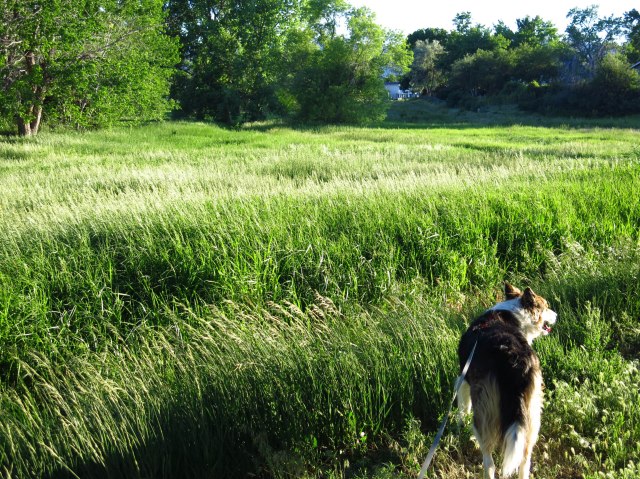 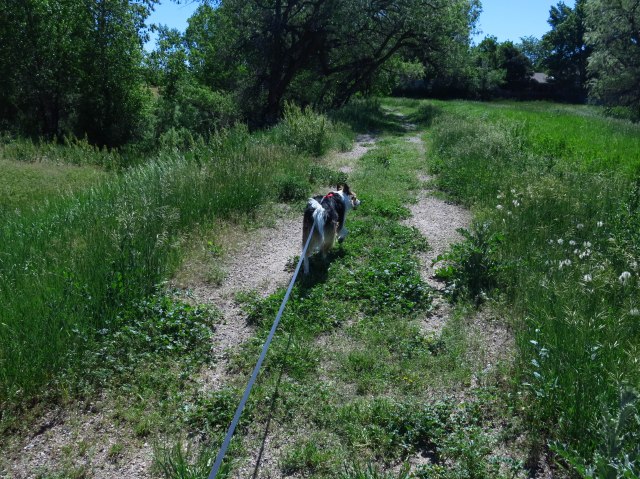 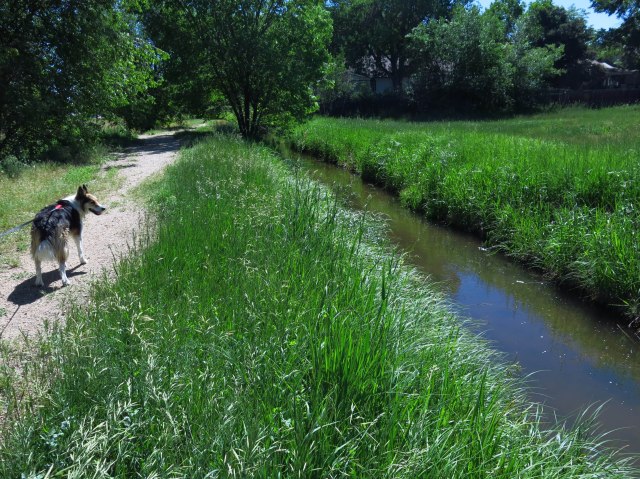 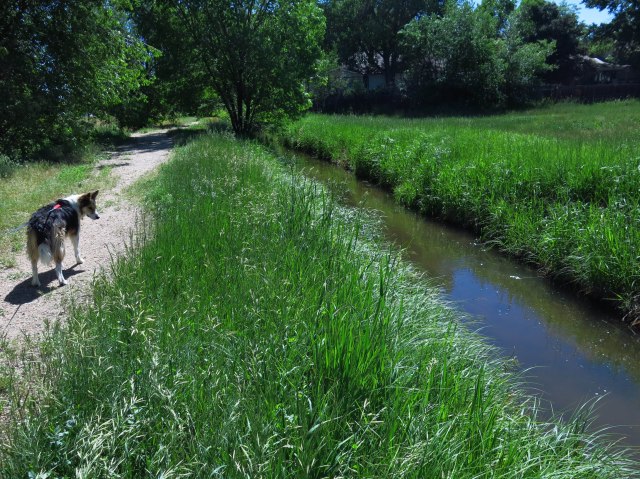 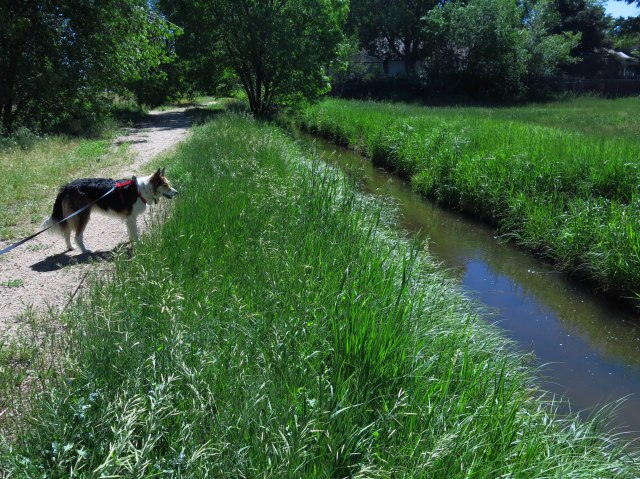 That’s all I have for today. I’ll leave you with a picture of me, on my walk, showing how much the grass needs to be mowed here. 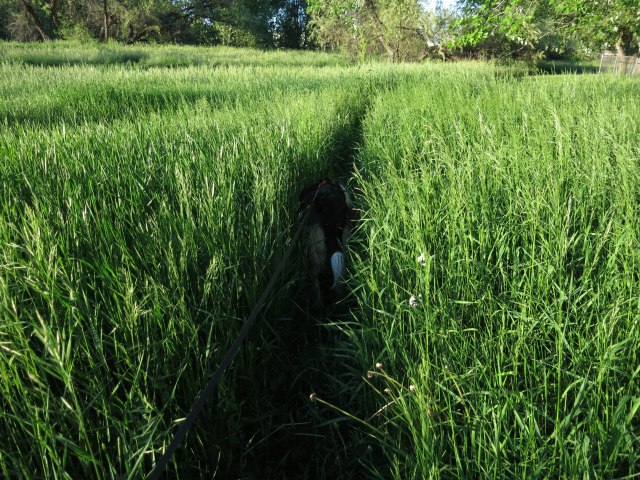