Greetings and salutations, everyone; yes, once again it is I, your popular host, Mani the purebred border collie, here today to bring you up to date on all the happenings around here. You may remember me from such posts as “Biscuit Time”, among so many, many others.

You can see that the snow is almost gone. It’s been here like forever. We are not used to having snow on the ground for so very long.

Because of all the snow, and especially ice, the guy I live with did something to his leg, and so he’s been laid up for quite a while now. He went to the doctor one day, and then to have ultrasound and an x-ray another day, and what it is is a ruptured Baker’s cyst. Behind the knee. He felt it snap on one of our walks.
If it sounds painful, well, it is. He’s been using a cane to walk, and lying in bed a lot, with an ice bag on his swollen leg. He’s very good at lying in bed, and so, as it turns out, am I.

Meanwhile, the weather has been very nice, that is to say “normal”, for once. In the mid-sixties, Fahrenheit. (Say about 17C.)
And there are now snowdrops. 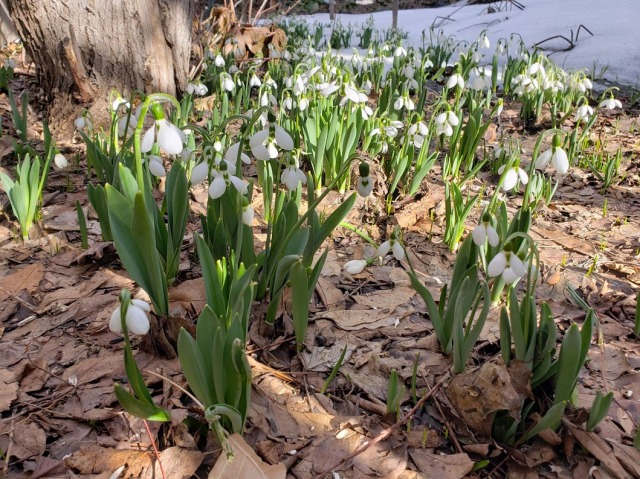 A bunch are escaping into the front yard, too. The guy I live with says they might find more freedom to spread, there.

This is one of the Greatorex doubles, called ‘Cordelia’.

Well that’s pretty much it. There are some crocuses in flower, too, so the only complaining I hear is about the leg. I haven’t been able to go on my walks, though, but the leg should get better eventually.

41 Responses to laid up