Greetings and salutations, everyone; yes, once again it is I, your popular host, Mani the purebred border collie, here to bring you up to date on all the news from our garden, and to help you catch up on our modern lifestyle. You may remember me from such solstice-themed posts as “Another Solstice”, among at least a few others. 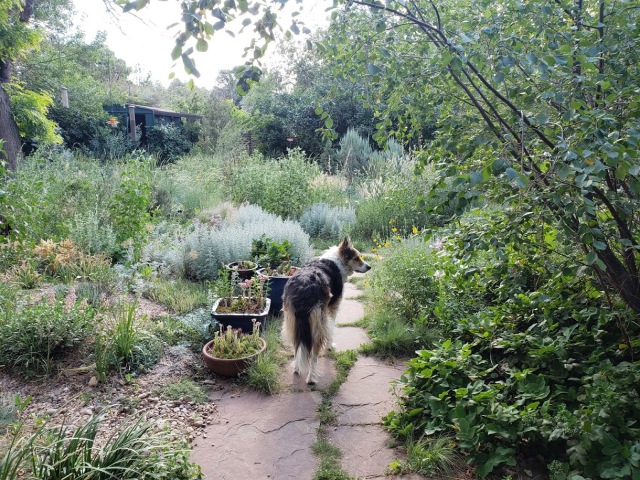 Not much of anything has been happening in the garden, I think. When we reach the solstice, the garden kinds of shifts to mostly grasses and the few perennials that don’t have to be watered a lot in order to flower. Like the Mexican hats, Ratibida columnifera. 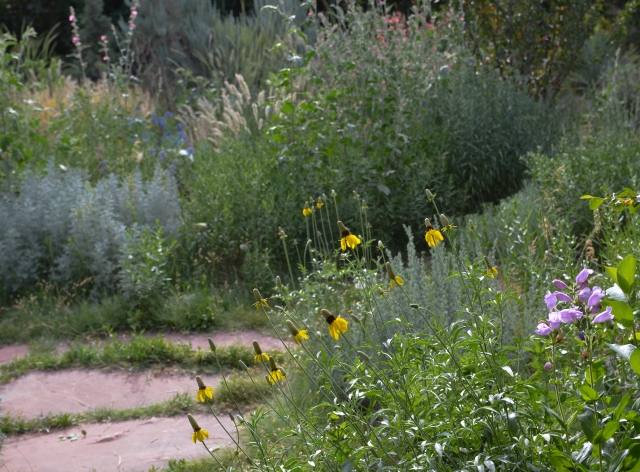 There are some of the red-orange ones here, too. The guy I live with really likes these.  They self-sow in the garden, which is what we want.
He’s always on the lookout for perennials which will flower for most of the summer but not need watering. They’re aren’t very many of those.

So far it’s been kind of an odd June. We’ve gotten some rain, which was nice, though the garden is dry again, but there haven’t been bad storms like a couple of years ago. That suits both of us just fine.
I guess the passing of another solstice is a big deal for someone who’s inclined to be ultra sentimental, but this has been such a bizarre year that the guy I live with didn’t even notice it was the solstice until he read “solstice” on Facebook.

He went out last week, in the car, to a rock garden meeting, and saw his friend, so that was good. He was a little worried (okay, a lot worried) about the car since he hadn’t driven it anywhere (except around the block) for two months, but it just drove. You’re supposed to drive a car about once a week even if you’re basically staying at home.

I keep hearing about how fortunate he is that he doesn’t have to go to work every day when there’s a pandemic, and that he can have food and groceries delivered. And there’s this place called “Chewy” that brings me my food, and treats, too. That’s pretty nice.

We have orioles. Robins steal most of the grape jelly, but if they don’t, the orioles come and eat it. 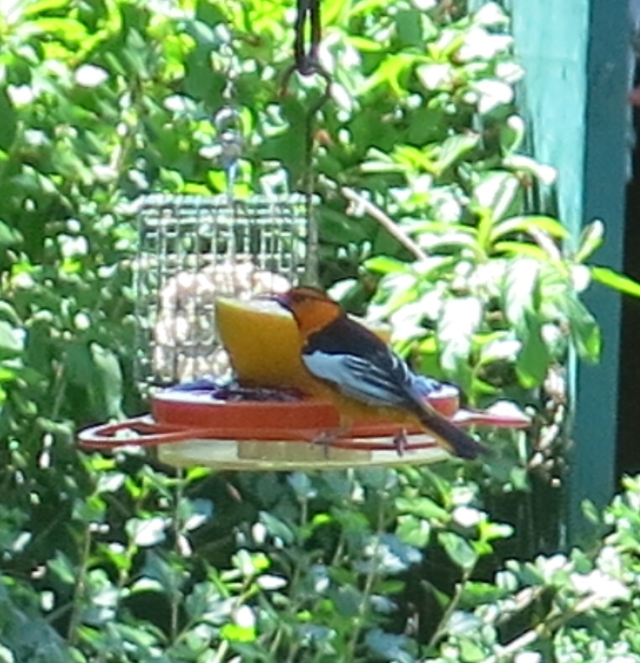 Not a great picture, taken with the point-and-shoot, but proof of orioles.
We have more grape jelly than a grape jelly store does. Just in case. The orioles like Welch’s.

Maybe I’ve said before, but last winter was a really terrible one; combined with record cold in October, and close to that in April, the result was a lot of die-back on woody plants.
The guy I live with thought the new desert willow (Chilopsis linearis) he bought last year at a nursery closing sale had died over the winter (they do that sometimes), but it’s come back. 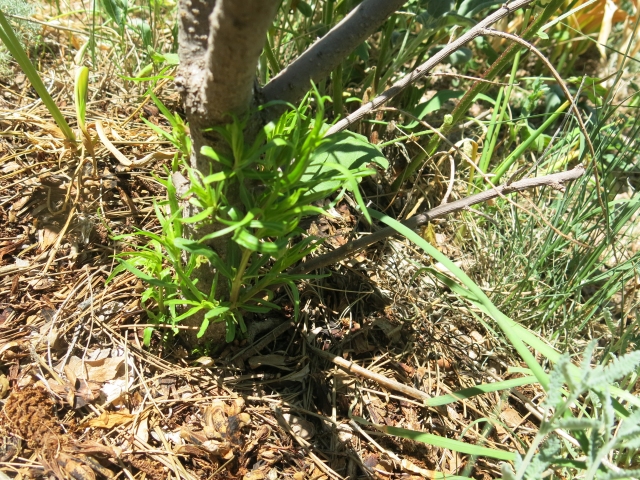 The big one in the front yard is about to flower, too.

And remember the backhoe tearing up the front yard? A couple of scrub oaks had to be moved, and the guy I live with really fretted about them.
But look what’s happening with this one: 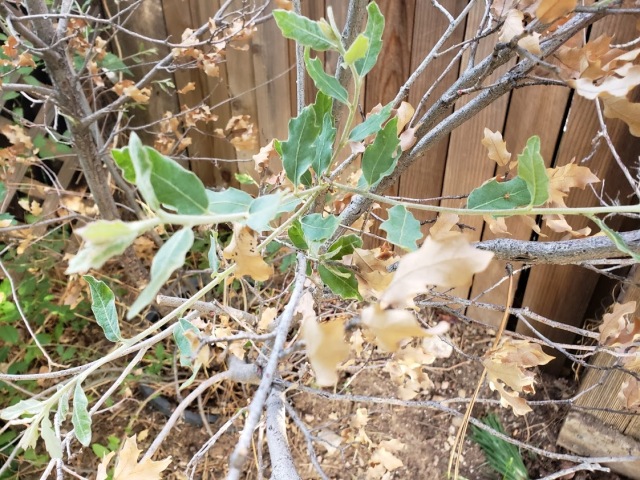 So good news on the oak and desert willow front.

Last week, half a yard of pea gravel was delivered, and the guy I live with spent most of the afternoon shoveling gravel into our ancient wheelbarrow and then spreading gravel in places that needed gravel to be spread on. He was pretty tired after all of that.
He said he needs to order some larger rock next. That’s even less fun to shovel. He has to wear ear plugs because it’s so noisy to shovel.

And then today, the roses came. Yes, roses. The guy I live with suddenly got all sentimental (see above), wondered what could be done with “The Enclosure”, the garden his wife made, and decided roses should go there. 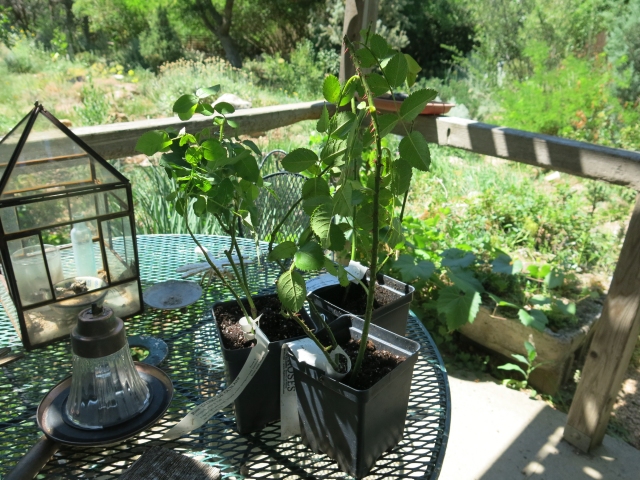 He got these from High Country Roses. Back in the last century he would drag his wife to High Country Rosarium (same company) on Park Avenue in downtown Denver, and walk around looking at roses.
The roses are ‘Gloire de Guilan’, ‘Blush Damask’, and ‘Fairmount Proserpine’. The last is a “found rose” growing at Fairmount Cemetery in Denver. He’s only been there once. I hear they have “rose walks” when the roses are in bloom, and people walk around looking at them. He’s never done that.

So that’s the news. Not really a whole lot, but something, anyway.
I’ll leave with you a picture of me walking along the canal road. The first picture doesn’t have me in it, but it’s kind of nice. Sets the mood, you might say. 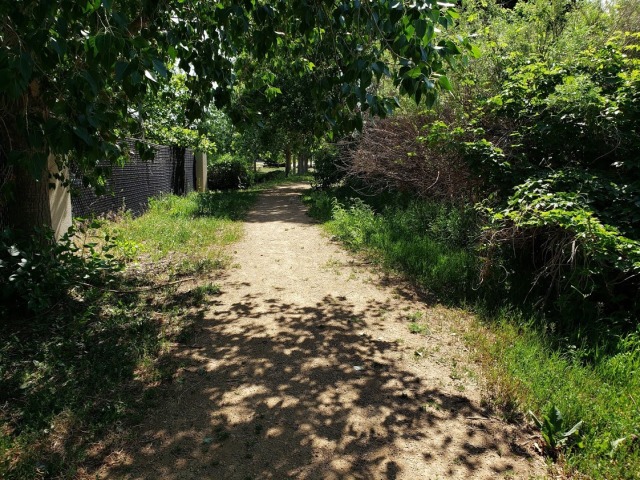 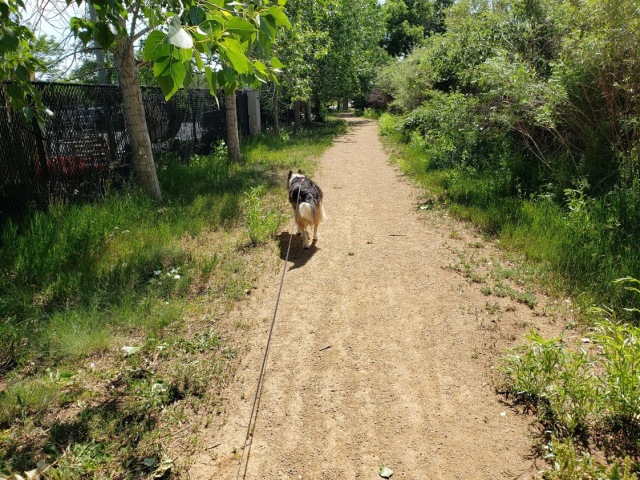 36 Responses to past the solstice