Greetings and salutations, everyone; yes, once again it is I, your popular host, Mani the purebred border collie, here to bring you up to date on all the news from our garden. You may remember me from such posts as “Dry Grass”, among so many, many others.

Here I am in a characteristic pose. I got my pants brushed, as you can see. 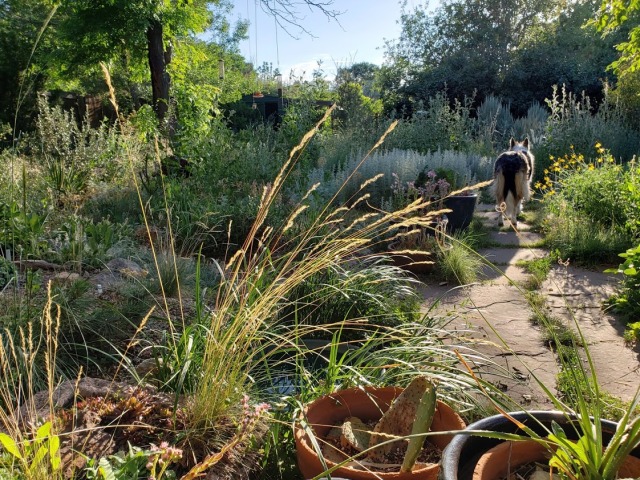 Not much has been happening here, gardening-wise, though there have been some things.
It’s mostly been so hot that I’ve preferred to stay inside, with a fan blowing in my direction.

Last night was horribly frightening; I spent most of the evening and night in my Upstairs Fort. Huge explosions and shrieking noises. (From fireworks, which are illegal here.) It lasted until two in the morning.
And then we had to try to sleep without pulling cool air into the bedroom, with the fan, because there was this strong acrid burning smell outside that lasted until about four in the morning.
The guy I live with explained that some people really are that inconsiderate.

He also left me at home last week for a couple of hours to go see the urologist. He is, right now anyway, cancer free. He doesn’t have to go back for six months, now.

And there’s oak news.  The ones that had to be dug up to make way for the backhoe in the front yard. The oak that was in a pot buried in the ground (or “plunged”, as they say) on the south side of the house was moved next to the other one in the side yard, watered pretty heavily, and now it’s leafing out, too. (It’s on the right, and there are a couple of tiny leaves barely visible at the extreme right center.) 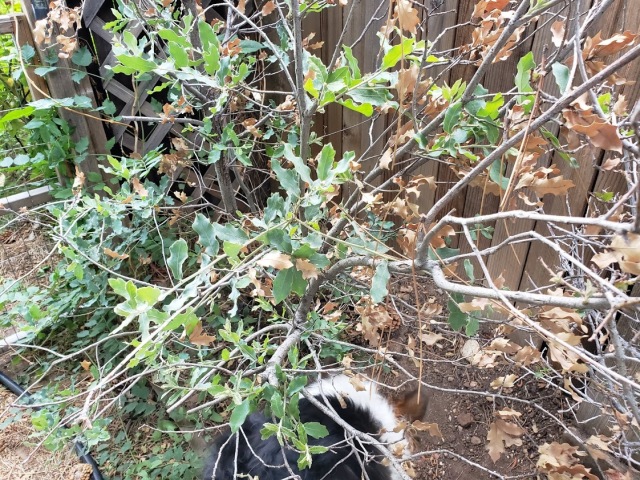 That’s pretty much it, except for the flannel bush (Fremontodendron californicum). Two of them, actually. 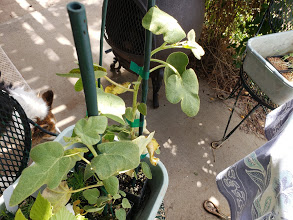 I’m not sure why this picture is so small, but anyway, the guy I live with heard from two people that the flannel bush was hardy here, in dry gardens, and so he had to have one. Or two.
I found it kind of surprising since he isn’t into that sort of thing–having to have things that others have–but this was an exception, I guess.
He said they might survive here.

Other than that, there hasn’t been much. My walks have mostly been okay, except when there are loud explosions.  It’s been too scary at night to have popcorn.
The guy I live with said he saw a Striped Kitty out in the field late at night, but I haven’t seen one, which of course is just as well. 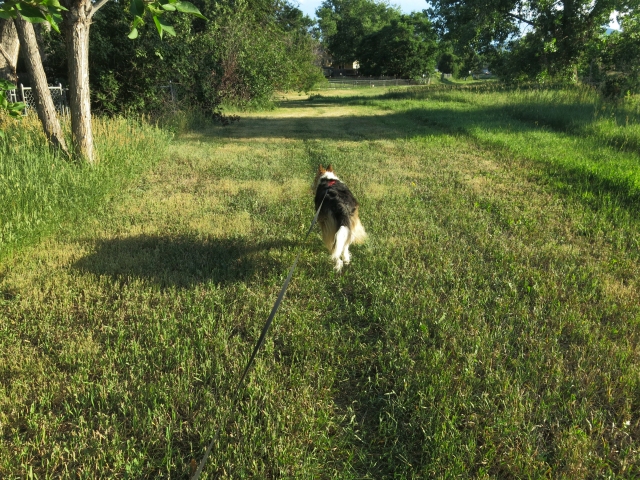 18 Responses to the flannel bush