Greetings and salutations, everyone; yes, once again it is I, Mani the less-tiny-than-before purebred border collie, filling in for the guy I live with, and here to bring you some news about our garden. You may remember me from such posts as “A Misty Day”, among at least a few others.

Here I am in a characteristic pose. I’m chewing on a pine needle. Rather rustic, don’t you think? 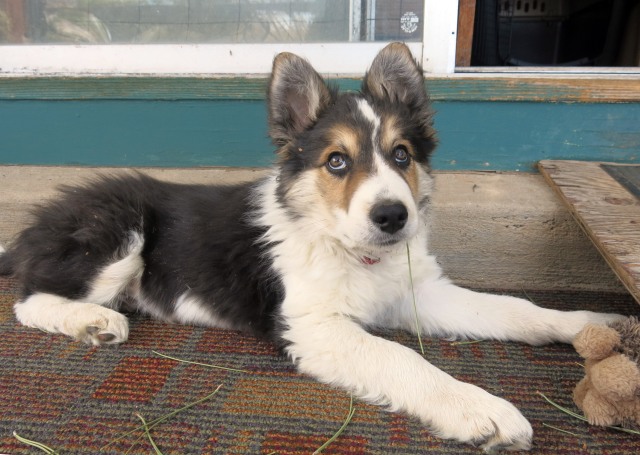 You may have noticed, since the last time we talked, that my ears have unfolded and are now gloriously upright. They may have been slightly cuter when folded, but now they are vastly more practical, and very pleasant to touch, or so I’ve been told. I’m not the first border collie to have lived here who had “radar ears”, as the guy I live with calls them, and so we already know they’re going to be excellent.

There are some garden-related things happening, too. It’s a pretty nice day (it’s 60 degrees F, 16C, and fourteen percent humidity), and so the guy I live with took some hellebore pictures. I understand that there are fewer hellebores this year because there was a big hellebore giveaway last year. I’m not allowed to go into this garden, as I discovered today, because hellebores are poisonous, and I might chew on them (I’ve tried practically every plant in the garden so far). I was told that the hellebores are really late this year.

Maybe you can see the slightly pink wash on this otherwise white one. 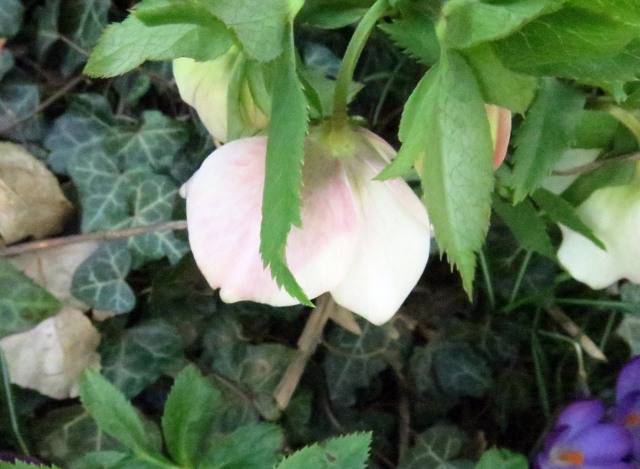 And then, pretty much out of the blue, the guy I live with had an idea. It was kind of scary, if you ask me, which he obviously didn’t. Oh, and by the way, you may notice some green grass in the lawn. Believe it or not, except for the one big clump, that’s not supposed to be there. It has to be dug out. Not by me, for sure.

I decided that it was better to watch it from a distance. There wasn’t really any point in having the sprinkler, which is what it was called, on, and so it was put away, for “next time”. In other words so I can get scared again. 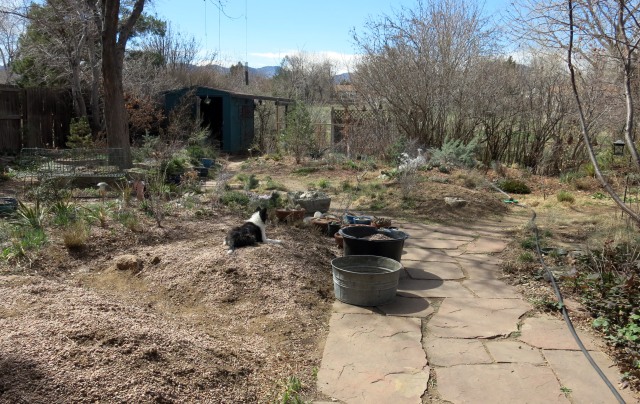 You can see in the picture above that the piles have changed appearance slightly. The guy I live with dragged out that ancient stock tank and says he might make a planter out of it. Or just leave it there as “an object of mystery”.  The other thing is a liner for a “whiskey barrel”, which I don’t know about, but I guess like if you wanted to grow water plants in a “whiskey barrel” you would have one of these liners. It holds pea gravel, which you can see, for the “final top-dressing” of the piles, which is going to happen after some larger gravel (not pea) shows up here.

Oh, and also, I have had this idea, for several days now, that you might want to see a picture of my excellent “rabbit feet”. They really aren’t rabbit feet, of course, because I’m a purebred border collie, but the guy I live with, whose sense of humor is boundless (according to him) calls them that. They’re bigger now, because I’m getting huge.

That’s about all I have for today. I think it would be appropriate for me to leave you with another excellent picture of me, on the couch, which by the way has turned into one of my favorite places.