the dog in the night-time

Greetings and salutations, everyone; yes, once again it is I, your popular host, Mani the purebred border collie, here today to bring you a rather different kind of post; one all about me. You may remember me from such me-related posts as “Double Feature”, among so many, many others. 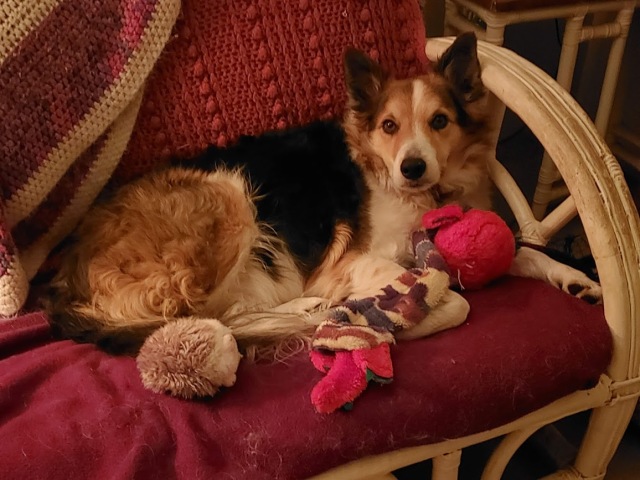 The guy I live with was asking me if I wanted to go on my midnight walk, even though it was snowing outside. I was pretty cozy there on the couch, as you can see.

But we went anyway, like we always do.
This is me, if you didn’t know. I’m checking out some things by the side of the canal road. 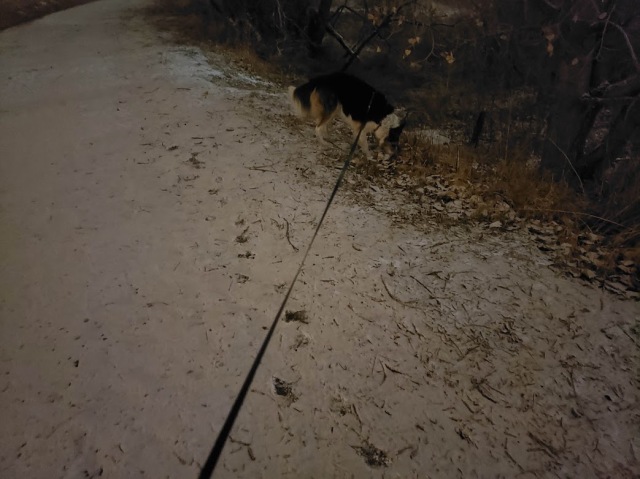 There are always interesting things to discover when we go on our late night walk. It was snowing last night, but not very cold at all. Just below freezing.
For some reason, the guy I live with took a bunch of pictures of trees, while it was snowing. 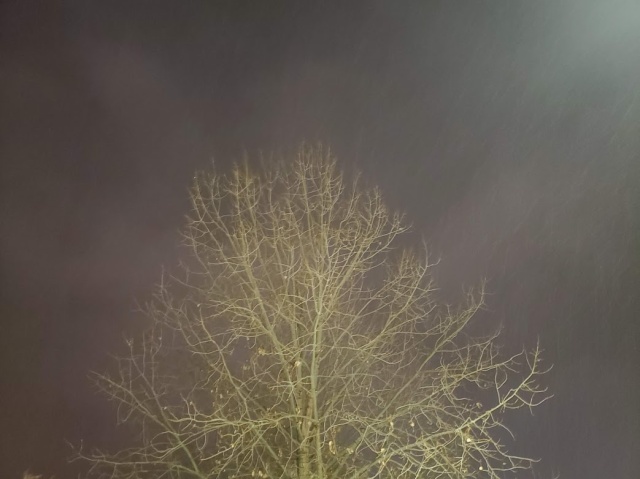 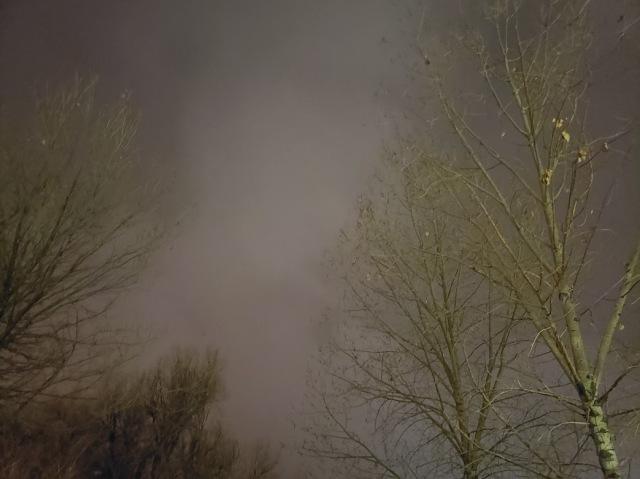 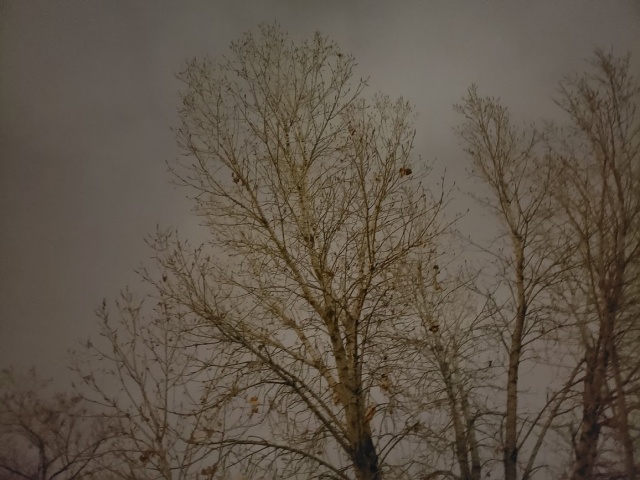 Well, okay, some trees in the snow.
Now back to me. 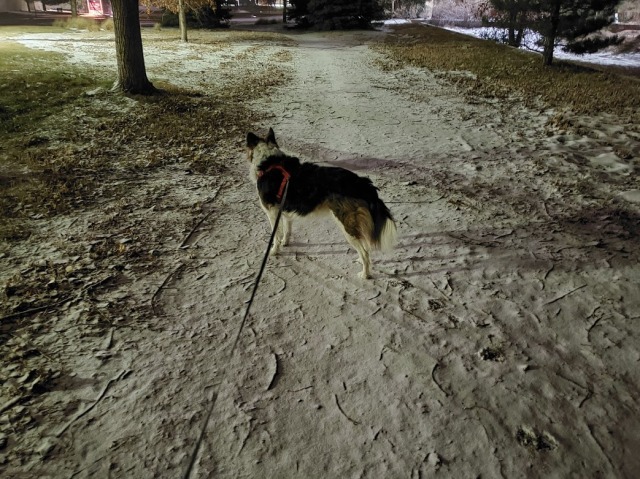 Here I am trying to decide which way to go. 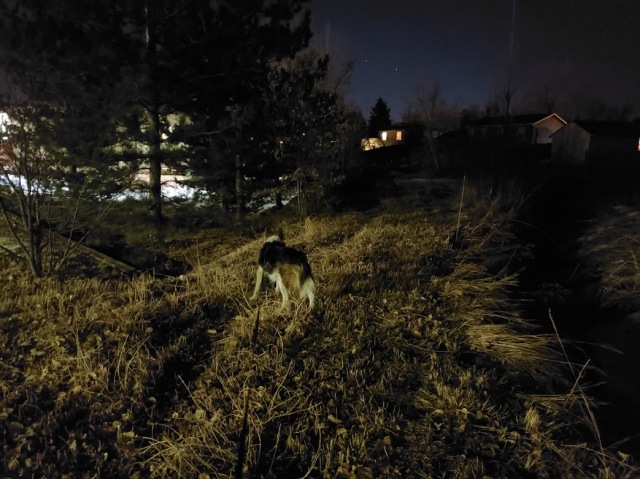 There are two ways to go (I mean aside from turning around). Straight ahead takes us along the canal road; it’s pretty dark there, except for one annoying spotlight. I can tell that coyotes walk along here.
The funny thing about going that way is that, earlier this summer, there was no path at all, though there used to be. But now there’s a path again. The guy I live with said it could be coyotes, or maybe people walk there with their dogs. It’s kind of a mystery. I’m not sure I like mysteries.

I decided to go this way. It’s still a road, but it just leads to the street. I’m about half a mile east of my house.

Here I am near the cable company building. This was the night before last. 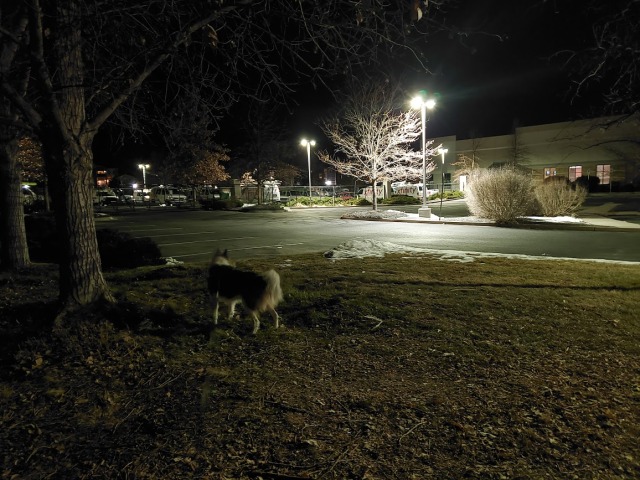 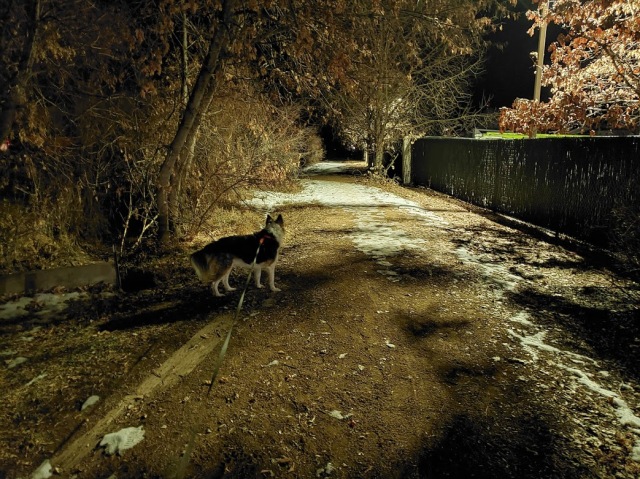 Just to the left of where I’m standing is an old sluice, for a farm house that used to stand where the parking lot is now. When the guy I live with and his wife moved into our house, thirty-five years ago, there was just the foundation of the old farm house.

We hardly ever see anyone on our late-night walks, but night before last, right at the end of the road there, and off to the right (north), just as we reached the road from the street we go on to get there, I saw something move, and then the guy I live with did too.
It was a dark figure moving toward us. I was very brave, as usual, but the guy I live with got a case of the creeps.
When we came back to that place, the dark figure was gone. The guy I live with said that was a lot better. He isn’t much into dark figures approaching him; he said it was too much like the dark figure in The Earthsea Trilogy. I, of course, being totally tough and deadly, wasn’t bothered at all.

Here I am on the canal road last night. A little bit more snow on the ground. 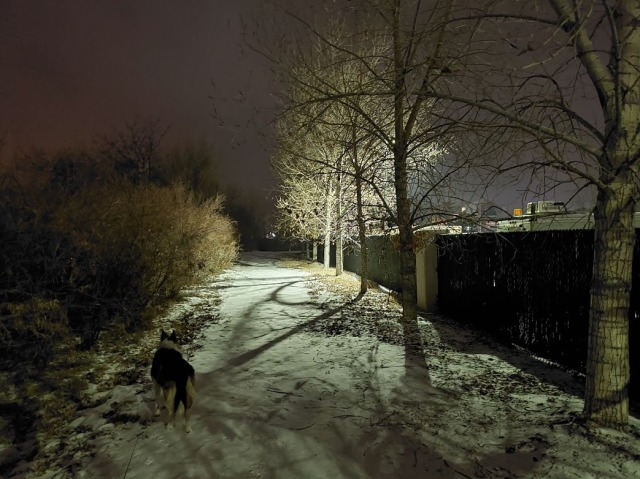 The guy I live with doesn’t like snow, as I’m sure you’re aware of by now. but we’re also in an extreme drought, which is predicted to get even worse next year, so I guess we’ll take what we can get, though he says the snow needs to melt to be useful. Not just sit around evaporating.

So that’s it; what it’s like on our midnight walks.
I hope you enjoyed this little photo essay. I’ll leave you with a picture of me on my evening walk, just today. 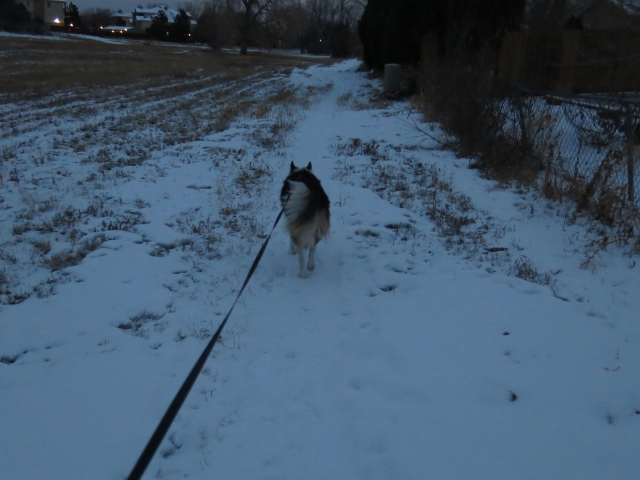 30 Responses to the dog in the night-time