Greetings and salutations, everyone; yes, once again it is I, your popular host, Mani the purebred border collie, here to bring you up to date on what’s been happening here, which is really not much at all. You may remember me from such posts as “A Wintry Mix”, among so many, many others.

Here I am in a characteristic pose. You may be able to see that it was snowing today.

It wasn’t very cold; above freezing, actually, but the snow means that the snowdrops and other flowers will be put on hold for another couple of weeks.
It’s always snowed here in winter, but the snow usually melted “back in the old days”. In the last several years, it hasn’t. The snow just stays on the ground.
And the paths in the garden get pretty icy. The guy I live with says it’s “hot paws racing out to bark at squirrels”, which is probably accurate.
You might not be able to see just how icy this path is, under the snow.

But you can definitely see how icy the flagstone is. This sort of thing doesn’t happen here all that often.

It’s slippery, for sure. The guy I live with keeps telling me to be careful, and I saw how cautious he was when he went out to fill the bird feeders.

One of the feeders is under the arbor, on one side of it, really, and just today the guy I live with looked up, and saw this: 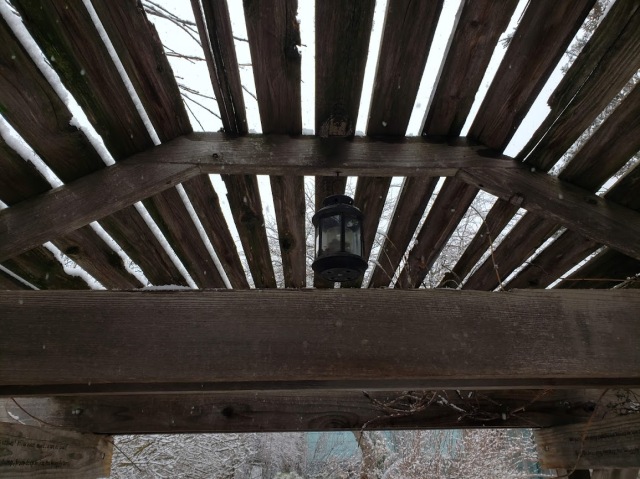 He just stood there for a while, looking at it, then took the picture you see. He said he wasn’t sure if he’d ever noticed that little lantern before. He probably had, but it came as a surprise anyway.

I know he’s been down in the dumps, lately. He’s been having trouble with his ear, and went to the doctor yesterday. He got some antibiotic drops; when he lies on the bed with the drops in his ear, I lie next to him, because I can tell how unhappy he is.
He’s going to have to go to an “audiologist”, which I thought meant he was going to go shopping for a new hi-fi, but that’s not it at all.

It’s not really that, though, just part of it. He’s been missing his wife, a lot, lately. Some people might say unkind things about that, the way they do, especially after all these years have passed, but that’s how things are. Something must have triggered it.
He hasn’t been able to see his friend for a while, though they talk on the phone quite a bit. He hurt his back shoveling the neighbors’ walks and driveways, and then this ear thing started last week. So there’s been a lot of staying at home, which suits me just fine.
If you ask me, which people don’t usually do, it’s because of being under the weather, which he hasn’t been, much, for years, and so it reminds him of the times when things like this happened and his wife was here.

But he does have me. And that’s a big deal, for him. Even though he’s been telling me I’m a “bed hog” in the last few days. Can you believe it? A bed hog.
I didn’t think there were all that many rules here, but it turns out that I’m expected to sleep parallel to the length of the bed, and not across it.
My excuse is that there are so many toys on the bed I can only fit one way, but the guy I live with just moves the toys and says there’s plenty of room “over here”.
And also (this part I understand), if I sleep right next to him, it’s toastier, and I get the full benefit of being able to sleep at least partly under the nice wool blanket the guy I live with got to make the bedroom even cozier. I can also see the TV better, when “Q.I.” is on. (It stands for “quite interesting”, if you didn’t know, and I can hear the guy I live with laughing, even though he watches the same episodes over and over again.)
He also says that even though I’ve never seen a sheep, I have an affinity with them, and so, by extension, with a blanket made of wool.

Well, so, anyway, I do have some plant news. Look at the seedlings of the buffalo gourd now. 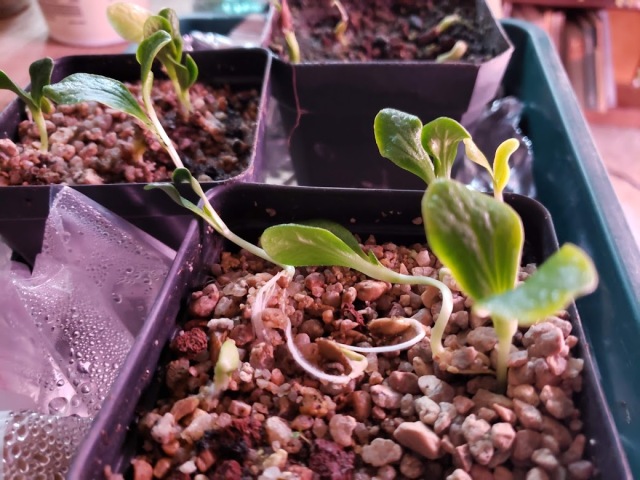 Obviously some transplanting will be necessary pretty soon.
I don’t know why some of the seedlings are yellow, though maybe it’s a nitrogen deficiency.
(The seedlings in the rearmost pot are Amsonia tomentosa.)

Our walks have been pretty nice. I haven’t had to wear my boots because it hasn’t been so cold.
The willows, like you can see in the first picture and in this one, are quite photogenic at this time of year. 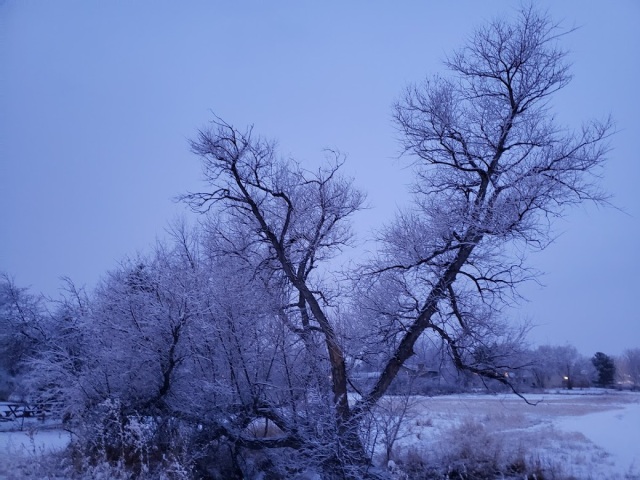 I’ll leave you with a blurry picture of me, on my walk just this evening. 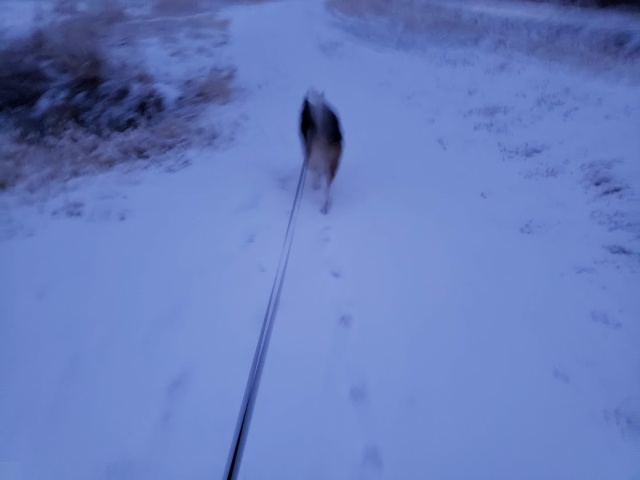 28 Responses to the bed hog